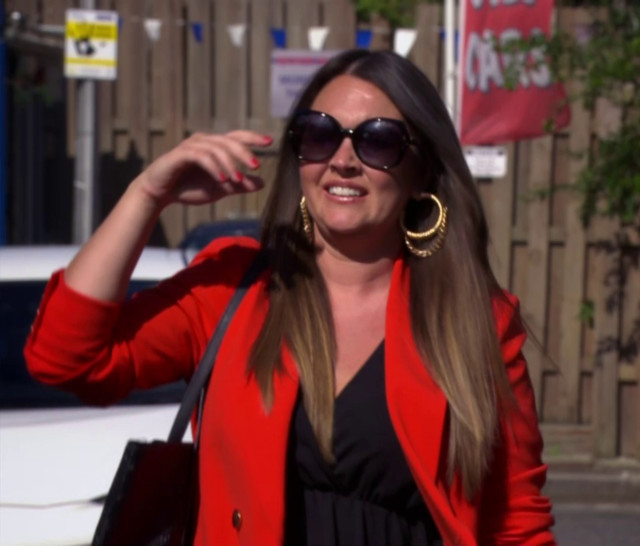 EASTENDERS fans rejoiced as Stacey made her long-awaited return to the Square and came face to face with Ruby, whom she stole money from.

The businesswoman had been struggling to find out who had taken large sums of money from her account, and it was none other than the returning Slater.

Stacey breezed back into Albert Square in tonight’s EastEnders

Ruby was having a heated conversation in the E20 club about the mysterious transactions, insisting that she had nothing to do with them.

She began acting a little shifty with Martin who wanted to take her out, but feared it would be too expensive, but so he wouldn’t suspect she was having any problems of her own, she gave in.

Soon after, Ruby did eventually tell Martin her money been stolen by someone pretending to be her, which was overheard by Kat who was cleaning the club.

Fans got their first glimpse of Stacey on the soap in over a year, buying expensive jewellery. She said: ‘Anyone would think you ain’t pleased to see me’

In typical Stacey fashion, she remarked: “I always found rubies a bit tacky, but yeah, go on I’ll take it.”

Back at home Kush heard Kat on the phone to Stacey and asked her why Ruby would call the police on Stacey.

Kat tried to get out of it, but was left with no choice but to tell him Stacey had taken Ruby’s money after she convinced Stace to get back at her because she is dating her ex husband Martin.

Stacey and Kush’s son Arthur came downstairs and overheard the pair say his mum had stolen some money, before Kush demanded Kat call her cousin and tell her to come back to Walford. Later, Martin was looking after Arthur and was once again talking to Ruby in the club.

The toddler interrupted their conversation and told them Stacey had taken the money.

A stunned Martin looked on in disbelief while Ruby stormed out of the club to find Stacey.

She didn’t have to go far as she found Kat waiting outside her home and demanded to know where Stacey was. Fans were delighted to see the soap favourite back on screen

A fancy white car would turn up and Stacey stepped out and swaggered toward Ruby and Kat.

She said cheekily: “The faces on the pair of you, anyone would think you ain’t pleased to see me.”

Viewers were over the moon to see Stacey back and had their say on a potential showdown with Ruby as the pair came face to face.

One wrote: “Stacey strutting across the Square like she’s on the Oscars red carpet.”

Another raved: “She is back !!!. Well done eastenders and so great to see Lacey back !!!”

A third predicted: “She’s a Slater. Mess with her, expect karma. Stacey’s BACK!”

Im A Celebs Jacqueline Jossa admits people see her as a doormat before tearful...

UK dodges recession as economy grows 0.2% – what it means for your finances

Ex-EastEnders star Adam Woodyatt’s divorce from his wife of 22 years has been finalised,...