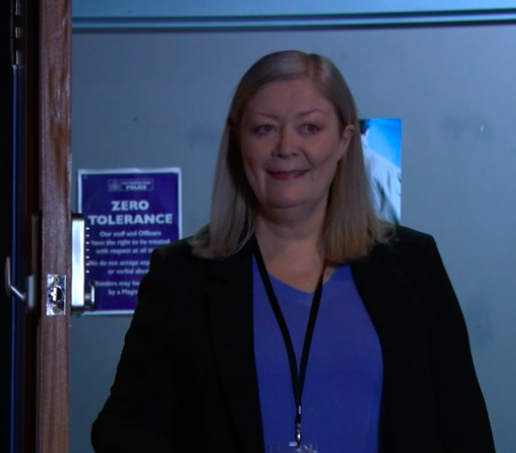 The police officer – played by Alison Newman – hasn’t been seen around Walford since 2015.

The detective chief inspector was last spotted in the Square when she was investigating the murder of Lucy Beale six years ago – and wrongly accused Phil Mitchell’s son Ben.

Last night she made a comeback during a scene with Phil and his solicitor Ritchie Scott.

The baddie handed himself into the police after going on the son with his son Raymond, and he’s also wanted in connection for Vincent Hubbard’s murder.

Both Phil and Ritchie were shocked when the newly appointed DCI Samantha Keeble walked in to the interview room at the station.

Phil said: “I heard you are DCI then?”

She replied: “Working the Lucy Beale case will do that for you.

“I’m sure you remember… and I don’t plan on stopping there because putting you away for life has got promotion written all over that.”

He said: “Well you need evidence for that and you ain’t got any.”

DCI Keeble put a spanner in the works when she said Aidan Maguire and DCI Alsworth have something on him.

The police have wanted to put Phil behind bars for years and it looks like Keeble is on a mission to do so.

And viewers couldn’t believe their eyes.

One wrote on Twitter: “Wow, Keeble what a blast from the past.”

Another said: “Thought we’d seen the last of Keeble!”

A third added: “Guessing they brought back Keeble so that she can act the villain force us to be on Phil’s side. Like DI Thompson last time.”

Keeble’s first ever appearance on the show dates all the way back to 2008 when she investigated Max Branning’s hit and run case.

She later was put on the Lucy Beale case and also investigated the murder of Nick Cotton.

After wrongly accusing Ben of killing Lucy, she was sacked, but has since then been promoted.

Actress Alison Newman, 53, has played a number of TV and theatre roles over the years.

One of her first was Maria Scanlon in The Bill in 1998.

She later went on to star in Bad Girls, Touching Evil and The Bill again.

In 2002 she started to play the character of Hazel Bailey in Footballers Wives.

She played the football agent for four series.

Since then she’s starred in Holby City, Casualty, Doctors and many more.

Where does each political party stand on the December 12 general election?