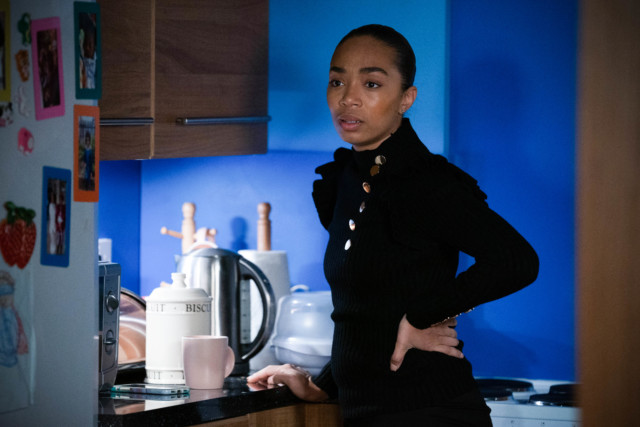 EASTENDERS fans are in shock after Chelsea Fox made a decision about son Jordan.

The businesswoman – who is played by actress Zaraah Abrahams in the BBC soap – has been rocked by her husband Gray’s arrest for multiple murders.

Chelsea Fox made a tough decision about her baby on EastEnders

But tonight, she decided that she couldn’t put their baby through a life as a serial killer’s son.

Speaking to her son, Chelsea said: “Your grandad gave me this big speech once, he told me to go out and be magnificent. The truth is I’m nothing special.

“I got one thing right though – people are never going to forget who your father was.

“It’s going to follow me everywhere. But that’s OK because all I care about is you. And this doesn’t have to be your life.”

Whitney then walked in to check on her pal.

But Chelsea was more concerned with what was happening in the Square.

“My only family thing it is down to me,” she said.

“Don’t matter anyway. The only thing that matters is Jordan.

“I’m going to make sure that nothing bad ever happens to him again.”

But she left Whitney shocked when she revealed how she planned to do it.

“I’ve decided when he’s well enough I’m putting him up for adoption,” she said.

Whitney recoiled and viewers were in complete shock at her decision.

One wrote: “Surely #Chelsea is making a huge mistake putting Jordan up for adoption?”

A second said: “Don’t put Jordan up for adoption Chelsea he needs you #Eastenders.”

Another added: “No Chelsea he’s yours and you have all the available family support around you! #EastEnders”

Chelsea confessed all to Whitney

Rita Ora wows in a khaki bikini as she splashes around with a mystery...

Emmerdale spoilers – Fans left open-mouthed as Meena’s fate is SEALED by Liam; plus...