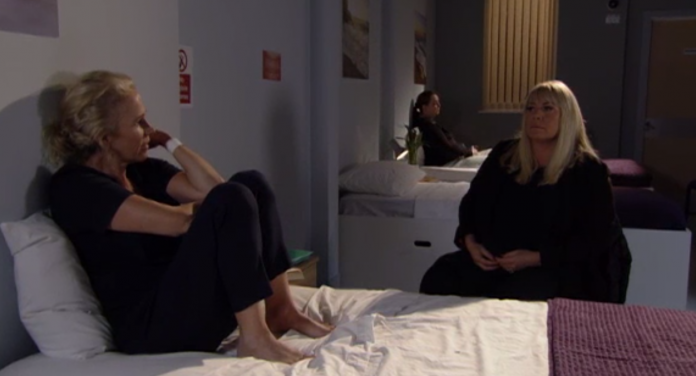 EASTENDERS viewers were left in shock after Sharon Mitchell admitted to Lisa Fowler that Keanu Taylor is the father of her baby.

She has been on the warpath against Sharon ever since and has been determined to find out who the father is.

In tonight’s episode, Sharon came clean to Lisa as she admitted Keanu is the dad.

While visiting Lisa in a psych ward, Sharon said: “I want to tell you the truth, you were right all along. This baby ain’t Phil’s.”

Lisa replied: “This is some sort of sick plan. You want me to lose it, scream and shout, so I’m in here for months.”

Lisa was startled to hear Keanu is the dad

Sharon added: “You wanted the truth and now you got it. Mel found out and she was blackmailing me- she milked me dry. I begged her to stop, I tried to reason with her, but she wouldnt listen.”

Lisa interrupted: “So you did kill her!”

Sharon hit back: “No, she was going to tell Phil so I had to stop her. I tried to save her Lisa- on my baby’s life.”

Lisa threatened Sharon, saying: “Do you want me to feel sorry for you. I’m going to tell Phil!”

Keanu was by her side in the hospital

Ben and Phil rushed to the hospital for Louise

However, Lisa was soon left startled as Sharon admitted: “You won’t tell him because Keanu is the father.”

As the episode came to an end, Lisa is left with a huge decision to make – does she shatter her daughters happy family to get her revenge against Sharon or keep schtum?

She began to experience pain at home and was soon whisked to hospital by Keanu and dad Phil.

Peggy was taken from Louise as soon as she was born

After giving birth, the baby, who they name Peggy, was quickly taken away as doctors say they’re concerned Louise is losing blood.

Next week, the couples lives are turned upside down when Peggy suddenly stops breathing.

Fans were left in shock by the events on tonight’s ep.

One wrote: “Wasnt expecting Sharon to just come out with it like that. Risky strategy!”

Another said: “oooft Queen Sharon is playing a dangerous game.”

A third commented: “THE BOMBSELL HAS BEEN DROPPED.”

A forth stated: “Omgsh wasnt expecting that Sharon #EastEnders yikes.”