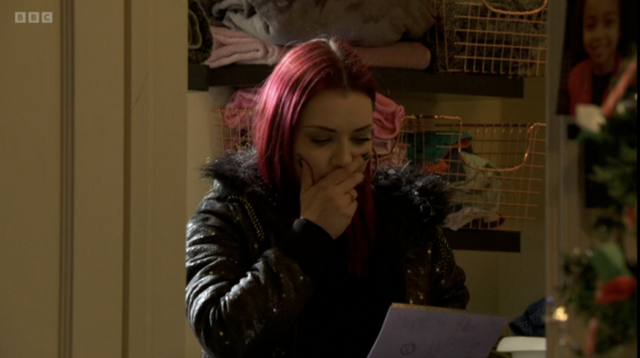 The market trader – who is played by actress Shona McGarty in the BBC soap – got access to Chantelle’s online posts about the abuse she was going through after being tipped off by Eve Unwin.

In Tuesday night’s episode Eve revealed she had heard of the Ball and Change event from previous years – Whitney’s interest was piqued.

And when she heard it was about a woman delighted she was matched with her dad, Whitney cornered her to get more information.

Eve told her: “I trained as a solicitor so I used to help people out in prison.

“And there was one woman who came up on appeal and she used this forum for advice.

“It was like a mums’ blog type thing. We were looking at that for evidence. There was a woman on the forum that was really happy about being matched with her dad.

“It gave her a few precious days away from home.”

Whitney asked Eve what it was called and went home to immediately search for answers.

At first she couldn’t get into the account but tonight Mia let slip some information that helped Whitney log in.

To her horror she found what she was looking for – an online diary from Chantelle detailing the years of abuse Gray put her through.

She was disgusted at what she read – but realised she finally has proof to get others to believe her about Gray.

And fans cannot wait for the killer to be exposed and get his comeuppance.

One wrote: “Proper Miss Marple isn’t she Our Whitney , I love the fact that’s it’s her who will expose Gray , I can’t wait for Xmas day, I’ll be watching like.”

A second said: “OMG! WHITNEY IS FINALLY FINDING OUT ABOUT GRAY.”

Another added: “that ending omfg.”

Swap big name brands to supermarket own-label products to save £16 after Heinz baked...

Alastair Campbell claims Jeffrey Epstein showed off to him because he wanted Tony Blair...