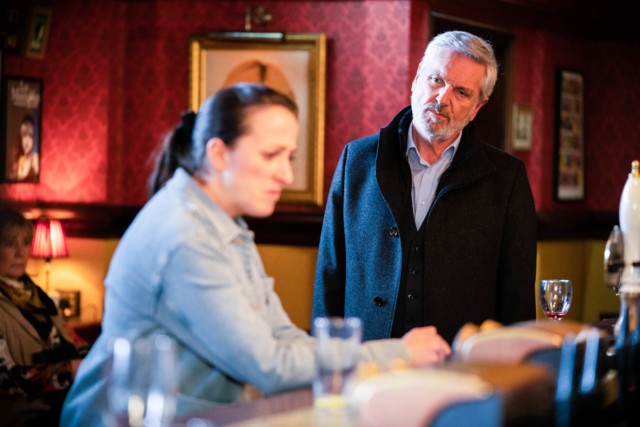 EASTENDERS fans have been left in tears after Sonia Fowler asked her dad Terry Cant to leave Walford.

The nurse – who is played by actress Natalie Cassidy in the BBC soap – was shocked when Terry revealed he was her dad and proved it tonight.

He arrived in the Queen Vic and was recognised by Jack Branning – and soon he had the entire family roaring laughing.

But after looking increasingly uncomfortable at how easily Terry found it to charm her entire family, Sonia walked out of the pub.

Without even saying goodbye, she left and he followed her outside but she wasn’t happy to see him.

“Family is being there,” she told him in an emotional outpouring.

Sonia was not happy to see him Sonia walked out of the pub

“The first breath, step, boyfriend, heartache, girlfriend. You don’t know nothing about me, you haven’t even asked.

“I’m sorry. I’m sure you’re a nice man and I know it was me who kicked all this off but it’s not a brilliant time.

“The families I see at work on the wards. Saying goodbye on an iPad – doing everything they can to hold onto one last minute and all they’ve got is virtual.

“It just feels a bit wrong that you can walk back in because you’ve got round to it.” “I understand,” said a devastated Terry.

“Look, Jack’s got my number so why don’t you give me a bell if it ever feels like the right time.

“It’s been a pleasure to meet you Sonia.”

He then walked off into the night leaving Sonia looking emotional and viewers in tears. One wrote: “‘Just come to meet my Beautiful Daughter ain’t I?’ Aw Terry.”

A second said: “You need to give Terry a chance Sonia to explain himself.”

Another added: “Sonia has got a point there but she needs to give him a chance, I hope that isn’t the last we see of Terry.”

EastEnders continues on Friday at 8:30pm on BBC One.

Why is Coronation Street not on ITV tonight?

Love Islands Adam Collard distracts fans with his huge bulge as he shows off...