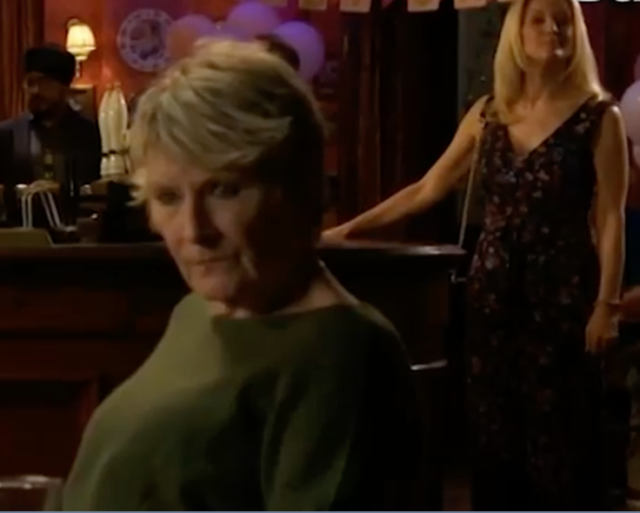 Kathy, played by 65-year-old Gillian Taylforth, looked incredible as she stood by the bar and offered to buy Brian Conley’s character Rocky a drink.

Kathy turned heads for all the right reasons in her low cut sleeveless dress that showed off her trim figure on EastEnders.

She certainly had an impact on Rocky, whose jaw-dropped when he saw her walk into the Queen Vic.

He promptly left the table where he was sitting with birthday girl Shirley to join Kathy by the bar.

Fans were stunned how hot Kathy looked and took to Twitter to talk about her transformation.

She certainly made Rocky’s head turn Another gushed: “Kathy Beale has been hot since 1985.”

During the episode Frankie Lewis threw a surprise birthday party for Linda Carter, and invited Sonia Fowler and her dad Rocky to come.

Frankie was hoping to set Rocky up with Shirley Carter, who has been distraught since her daughter Tina disappeared. She has shown off her timeless look on the show Fans say she’s been hot since she joined in 1985, as Ian Beale’s mum

Sonia had her own game plan though – she invited Kathy to the party, and told her to act fast if she fancied her dad.

At the party, Shirley and Rocky were getting on well, until Kathy walked in and caught his eye, leading him to rush over to Kathy and try his luck.

Gillian found fame in Albert Square in 1985 and remained until 2000.

She then appeared in Footballers’ Wives, The Bill and Hollyoaks before returning to EastEnders in 2015.

Love Island’s Molly-Mae Hague devastated as her cat fights for its life after being...

Tesco Clubcard holders can get Ratchet & Clank: Rift Apart for PS5 for £25...