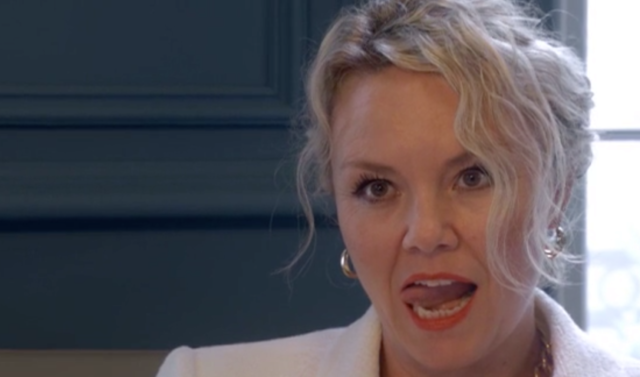 LEGENDARY soap villain Janine Butcher has made a sensational return to EastEnders – with a NEW identity.

Jaws dropped at the end of tonight’s episode when Scarlett’s evil mum – who murdered her dad Michael Moon – appeared on screen posing as a kids’ doctor.

Actress Charlie Brooks made her long-awaited comeback in a scene with Sharon’s half brother Zack.

He’d taken his nephew Albie to see a specialist while Sharon fretted at home over Phil being jail.

But in strutted Janine, who introduced herself as Dr Judith Bernstein and immediately began flirting with him.

She looked the part, dressed in patent stilettos, gold rimmed spectacles and a white jacket.

Clapping eyes on hunky Zack – who had no idea he’d just met one of Walford’s most infamous residents – she said: “Cute.”

And Janine purred back: “Actually it’s Dr Bernstein. Judith Bernstein. I am so sorry I’m late. There is always something keeping me away…

“But, here I am now. Metre’s running. Give me your worst!”

Viewers will have to wait until tomorrow night to find out what scheming Janine is up to.

But they went wild on Twitter seeing Janine back on screens.

One tweeted: “#eastenders COME ON JANIIIIIIIIIINE!!!”

Another roared: “JANINE’S BACK!! #EastEnders“

As a third cheered and typed: “Yes Janine has returned #EastEnders.”

In 2014, viewers saw Janine leave Walford for Paris to be with daughter Scarlett, having been shunned by Albert Square residents for getting away with killing husband Michael.

Kat Slater gave Janine a fake alibi, meaning, just like the other two deaths she caused, Janine got away scot-free.

Seven years later, she’s back in Walford and ready to cause more mischief, and Charlie says viewers would be disappointed if her character was anything other than evil.

She told HOAR: “People have an expectation of what they want and so do I, so you want to live up to that.

“It would be criminal not to bring her back and go where we all want her to go, which is the whole ego and evil side, and we’re definitely getting that.”