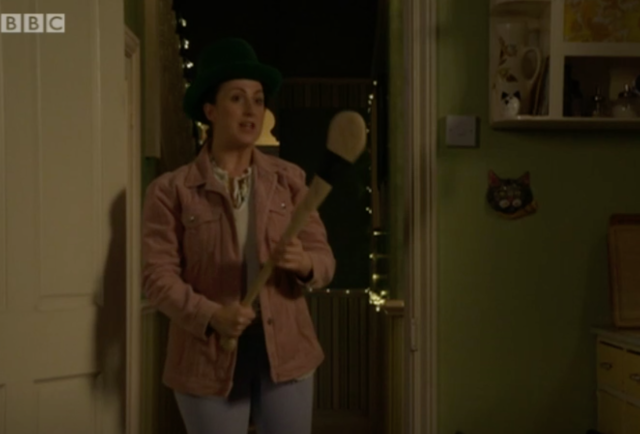 EASTENDERS fans were left open mouthed tonight when Sonia brutally knocked out a sleazy customer with a hurling stick to save Tiff and Dotty.

The nurse made a triumphant return to Walford tonight, making her first appearance since January.

Tiff and Dotty continued their dodgy scheme of overcharging certain customers for their drinks at E20.

However, things went a step too far this evening as they realised they had overcharged a student, who they guessed would not be able to afford their prices.

He ended up having one too many and the pair decided to get him a hot drink to sober him up.

Feeling guilty about what they were doing, Tiff said to Dotty: “I don’t think I can keep doing this, Ruby was right I’m not cut out for it.”

Keen to keep her involved Dotty retorted: “You’re a natural, don’t tell anyone I said this but you might be even better than me. Next shift let’s prove Ruby wrong and show her we can do this.”

What the pair didn’t realise is one of their previous customers who they overcharged overheard their chat and wanted to get his money back.

When Tiff and Dotty arrived home, the customer soon followed them inside and gave them the shock of their life when they saw him standing in their kitchen.

“I just want my money, you give it to me and I’ll leave, simple.” After they said they didn’t have any cash, the customer was determined to leave with something, as he uttered: “If you don’t have the cash, we’re going to have to find another way for you to pay me.”

Tearing up and shaking with fear, Tiff asked “how?” before he replied with sick smirk: “I’ve got an idea…” But before he had a chance to make a move, a returning Sonia emerged from the shadows and smashed him in the back of the head with a wooden object.

She said sarcastically: “And people say duty free is a waste of money”, while looking at Tiff and Dotty in shock.

Twitter viewers were delighted to see Sonia back and make sure Tiff and Dotty were no longer in danger, least for now.

One fan wrote: “Okay but Sonia coming back from Ireland with a Hurley and belting it across someone’s head is the most Irish thing ever to happen in an English soap #eastenders

A second penned: “Sonia’s a legend!

While a third added: “Jesus Sonia was fair handy with the auld hurl there! What a clatter!!”

Rishi Sunak hints at tax hikes to pay for coronavirus as he warns of...