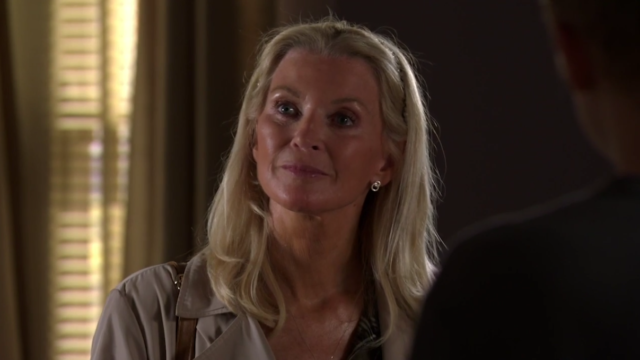 EASTENDERS viewers couldn’t help but be seriously distracted by Kathy Beale’s appearance as returned to Walford this week.

The long-standing Albert Square resident’s sun-kissed look was the main topic of conversation as she rejoined her family on the BBC soap.

Back from holiday, the character – played by Gillian Taylforth – was greeted by grandson Bobby, who had put on a sweet homemade breakfast and flowers for her arrival.

With her blonde locks held back by a hairband and a tan from her weeks abroad, fans rushed to Twitter to comment.

A third gushed: “I want whatever Kathy’s on she looks great for 35 #eastenders”.

Praising her outfit, one viewer commented: “And Kathy in a headband? All these 90s vibes! #eastenders”.

But Kathy’s sweet reunion was shortlived as she was updated on the gossip while she’d been away.

As Bobby attempted to break the news on his recently changed relationship status, he’s stopped by his brother Peter.

Interrupting the conversation, Peter comes downstairs and while he announces that the family businesses are all doing well – he casually drops in that Bobby has split up with Dana.

Viewers later see the pair rekindle their relationship – much to Kathy’s delight.

But Dana’s father Harvey isn’t so keen on the pair being together.

Kathy vows to help change Harvey’s mind about both Bobby and his relationship with Dana. Peter was quick to update her on what she’d missed

Brits to find out next Monday if June 21 Freedom Day will move to...

Weddings restrictions set to be eased despite June 21 lockdown lift being delayed, minister...