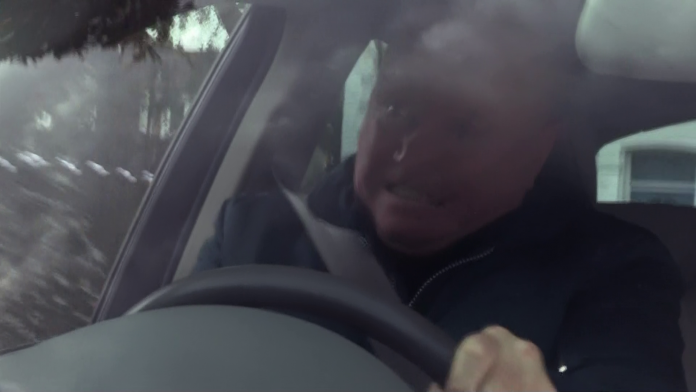 EASTENDERS fans were shocked as Phil Mitchell nearly kills kids as he seeks revenge on Jack Branning for his “affair” with Sharon.

The Mitchell family are in turmoil after the patriarch discovered the baby Sharon is carrying isn’t his.

However, while viewers know the baby is in fact Keanu Taylor’s – who is expecting a baby with Phil’s daughter Louise – the hardman mistakenly believes Jack is the dad.

Ben Mitchell is trying to get his dad to be more careful with his revenge, but Phil has a short fuse.

Sitting in his car, he spots Jack Branning crossing the road alone.

In a moment of madness he slams on the accelerator and speeds towards the police officer.

At the last moment, Jack’s kids run into the road, causing Phil to slam on the brakes.

A furious Ben catches up to his dad and shouts: “What the hell are you doing?”

Fans were shocked to see Phil nearly kill kids in his attempt to get revenge, with one person saying: “Phil was actually going to run Jack down in daylight! Phil done lost it!”

Another added: “OMG. Phil is crazy. ”

A third said: “Phil Aiming To Run Jack Over? Will His Nightmare Ever End?”

Later on, in the flat, he says: “You have got to stop this right now dad, you are losing it. What if you hit one of those kids?”

Ben bites back: “Get a grip. You will get done for murder and you will go down for life. I’m not losing you

But Ben isn’t having any of it, and replies: “Of course I get it. Of course I know why you’d want him dead but you ain’t thinking straight. You need to be as far away from this as possible. Let somebody else get their hands dirty.”

Just days left to get McDonald’s Katsu curry nuggets and 3 other items before...

Thousands of pensioners feared to be missing out on extra cash to help with...