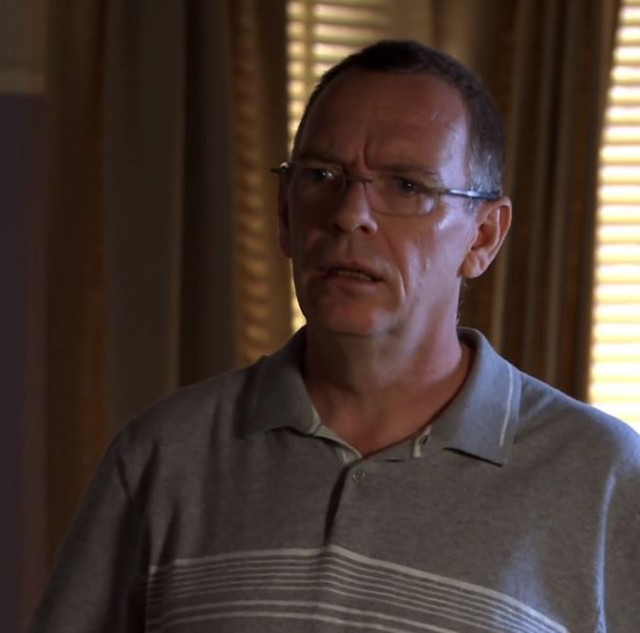 EASTENDERS fans are sickened after Ian Beale ripped off his own mother by fraudulently remortgaging her cafe without her knowledge.

The cash-strapped weasel – who is played by actor Adam Woodyatt in the BBC soap – is desperate to get his hands on easy cash after getting into debt buying the Queen Vic.

Viewers know he stole from Max Branning to fund the purchase – and now Max wants his money back.

Tonight his son Peter discovered how far Ian had fallen when Kathy offered to remortgage the cafe – and Ian visibly panicked.

Sensing something was amiss Peter searched through the house for any documents and found a letter to Kathy hidden.

He then confronted his dad: “Why would gran offer to remortgage the cafe when she already has? He confronted Ian about the remortgage of the Cafe

“I found the letter from the bank. First you rip off Max and then you rip off your own mother.”

But Ian found a way to shut Peter down – by paying him off and simply denying everything.

He said: “Why do you automatically think this is me? Why do you always think the worst of me?

“Peter, your gran didn’t want you to know. But the truth is that she’s having cash flow problems with the cafe being closed for all those months. So she took out a mortgage on the place. Kathy offered to remortgage the cafe to help Ian out “So you’d rather believe that I was stealing from my own mum, do you really think that little of me. Don’t ask her, she told me in confidence and she’s a proud woman.

“Why are you always trying to cause trouble? I was even thinking of reinstating your allowance but why should I support a son who doesn’t support me?”

Viewers were sickened by Ian – and Peter for taking his allowance back in return for keeping his mouth shut.

One wrote: “So, he’s definitely passed that point where he would do anything to keep up his lies”

A second said: “Eugh Ian is disgusting – stealing from your own muvva!?”

Another added: “Erm why does Peter have an allowance? What is he 12? And from Ian of all parents?!”

Stacey Solomon brands Joe Swash ‘pervy’ as he rubs against her on garden swing...