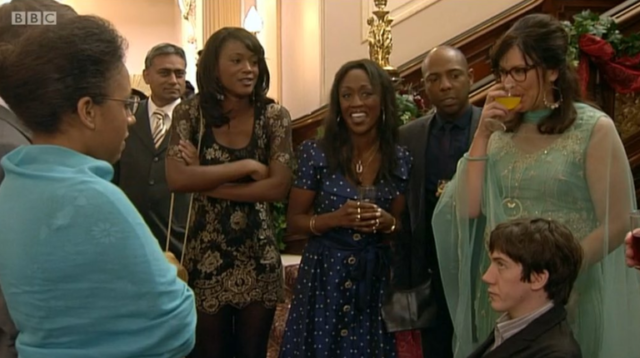 EASTENDERS fans have spotted an eerie prediction that Ben Mitchell would commit murder in an episode from 2010.

The soap has been revisiting some iconic episodes and Albert Square fans were left stunned when they spotted a clue suggesting Ben Mitchell would become a killer.

Fans spotted an eerie prediction from a 2010 episode of EastEnders

The creepy prediction comes from an episode that aired two years before he battered Heather Trott in 2012.

Most recently, it looked back on Syed’s wedding – particularly the run-up to the nuptials that saw the latter come out as gay to his mother Zainab and a crushed Christian watched on as the love of his life reluctantly got married to Amira.

However, Denise, who was a guest at the wedding, highlighted how moody Zainab seemed despite witnessing her son get married.

She remarked: “Positively murderous, she was,” as Manda Best referenced another major storyline that saw Archie Mitchell killed a few days earlier, replying: “Oh, maybe she’s the one that clobbered Archie Mitchell?” Ben killed Heather back in 2012 “We all know it was a Mitchell that done it,” Chelsea chimed in, as Darren Miller chuckled: “Maybe it was Ben… Tap-dancing him to death?”

While avid fans will remember that it was Stacey who bludgeoned Archie to death, audiences tuning in on Tuesday night (July 7) were spooked by the fact that Darren’s casual remark actually foreshadowed what Ben would do down the line.

In March 2012, Ben (played by Joshua Pascoe at the time) confronted the mother of Darren’s son Heather after he believed she had snitched on him his father Phil to the police.

Ben lost it and hit Heather with a picture frame, which saw her hit her head on the kitchen counter which proved to be fatal. Speaking of EastEnders, it was reported last month that Kat Slater star Jessie Wallace has returned to EastEnders following her two-month suspension.

HOAR reported that the 48-year-old was temporarily written out of upcoming plots on the show after an “incident” that took place during filming.

However, all that seems to be in the past as she was seen driving up to the barriers of the famous Borehamwood studio.

Before entering the site a security guard was tasked with taking the actress’s temperature, as they held a thermometer in their hand.

Did you miss our previous article…
https://www.hellofaread.com/soap-opera/ryan-thomas-poses-with-boohoo-boss-pal-as-firm-is-engulfed-by-leicester-sweatshop-scandal/