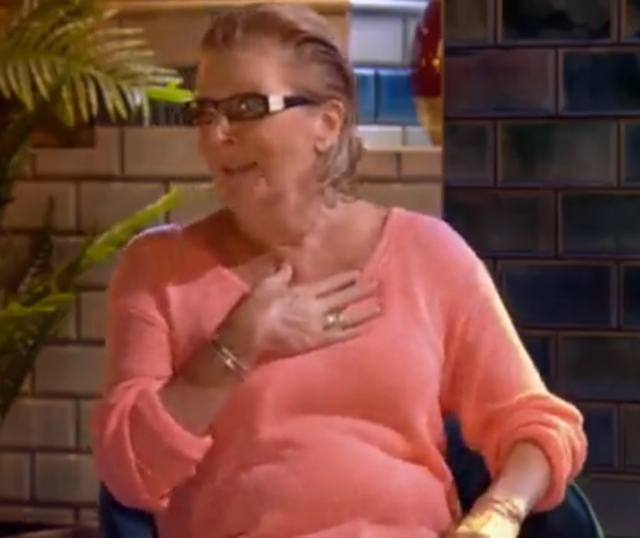 EASTENDERS fans were left stunned this evening when Shirley Carter actress Linda Henry broke down in tears on tonight’s Secrets From The Square.

The 57-year-old actress is famed for playing the hardfaced, tough nut Walford resident – and viewers couldn’t believe how different she is in real life.

As host Stacey Dooley kicked off the episode, she asked Linda and her co-star Luisa Bradshaw-White – who plays her onscreen sister Tina – how they had spent lockdown.

Linda suddenly started weeping as she admitted that she’d been missing her grandson, with Luisa dropping another bombshell as she revealed that Linda cries “all the time”.

Stacey asked: “What have you been doing in lockdown?”

Linda replied: “I’ve just been at home, I live with my husband and my dog Johnny.” Linda was too choked up to speak Her voice then notably cracked as she continued: “And really wishing – my grandson… I just really…”

She then stopped talking as she started to cry, going on to tell Stacey that her grandson was two years old.

Luisa giggled: “She cries about everything.

“You do, you always cry – you’re so sensitive.” Linda appeared on the show alongside onscreen sister Luisa

Linda continued to choke up at various points throughout the episode, and fans were shocked by the emotional display.

One tweeted: “Obsessed with how Linda is basically the opposite of Shirley”.

One more agreed: “Linda Henry is the absolute opposite of Shirley and I adore it.”

A third wrote: “The fact that Linda Henry is this sweet and sensitive is making 2020 ok”. Fans couldn’t believe what Linda is like in real life

Another was surprised by her physical transformation, writing: “I can’t believe that’s what Shirley looks like in real life! She’s even more amazing!”

Luisa even revealed that Linda cried when she found out what was in store for Shirley when EastEnders returns to our screens next month.

Linda said of her character: “The past comes back to bite Shirley on the bum.” The star is one of Walford’s toughest characters

Addressing her co-star directly she continued: “Because you do cry.

“She gets really emotional.” Luisa revealed that her character Tina got coronavirus in lockdown

And Luisa’s Walford alter ego Tina has her own battle, with the actress revealing that her character got deadly coronavirus in lockdown.

She explained: “Tina got coronavirus and was living with Ash and Iqra.

“Tina comes out really wanting a relationship and love, so we start really from there with Tina.”

EastEnders will return to our screens in September after being forced off air earlier this summer after the BBC One soap ran out of pre-recorded episodes during the ongoing coronavirus pandemic.

Did you miss our previous article…
https://www.hellofaread.com/soap-opera/coronation-streets-sam-aston-welcomes-a-son-with-wife-briony-as-baby-boy-arrives-six-weeks-early/

Prison bosses bought hand sanitiser at £35 a litre – same price as a...

Boris Johnson will step up his campaign for greener planet by urging world leaders...

I’m A Celeb’s Kadeena Cox the worst offender as she tries to sneak 25...