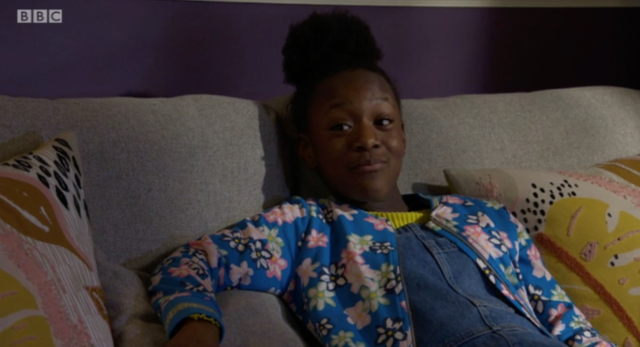 EASTENDERS fans are terrified for Mila Marwa’s sister Kioni as she was ‘snatched’ by her mum planning horror FGM.

The barmaid – who is played by actress Ruhtxjiaïh Bèllènéa in the BBC soap – recently revealed to Kathy Beale that she is a victim of FGM – and her sister is about to be too.

Kioni was missing when her sister returned home

Mila revealed the shocking truth while begging Kathy to let Kioni stay after she rocked up on the Square to find her sister.

Kioni told Mila that her mum was trying to be nicer, and had even planned a nice holiday just for them.

But the holiday sent alarm bells ringing for Mila, who realised her sister was facing horrific FGM.

In tonight’s episode, Mila and Kathy asked Bobby to keep an eye on Kioni as they headed out to the pub to have a secret discussion. Kathy and Mila are shocked to find her gone

“So what are we going to do? Not that I’ve got a clue what to do. I still can’t get my head around it. Are you sure this isn’t a shopping trip?” Kathy asked.

“You’ve got to go to the police. If you tell them what your mother did…” she continued.

“They’ll arrest her,” Mila butted in.

Kathy went on to hint that she didn’t think that would be the worst case scenario. But Mila said: “She’s not a monster Kathy. It’s our culture.” Mila was terrified to find her little sister missing

“What to mutilate your girls,” Kathy replied.

Mila then begged Kathy to let Kioni stay while she worked out how to protect her from her mum, but Kathy clearly had doubts.

Meanwhile, Bobby gave Kioni his phone number and told her to ring him if she needed anything as he headed out on a date.

When Kathy and Mila returned, they were perplexed to see that Kioni had vanished and horrified when Bobby told them that she’d got bored and gone back to her mum.

Fans flocked to Twitter to express their concerns for Kioni.

One said: “Omg Bobby what have you done with letting Kioni go home! She’s in serious danger now. Wake up and smell the coffee.”

Another added: “Oh Bobby what have you done? Save Kioni pleaseee.”

A third chimed in: “No what are you doing Bobby? Don’t leave Kioni on her own!”

EastEnders airs Monday, Tuesday, Thursday and Friday nights on BBC One and is available for catch up on BBC iPlayer.

Coronation Street fans stunned as Sinead Tinker appears to Daniel before he sleeps with...