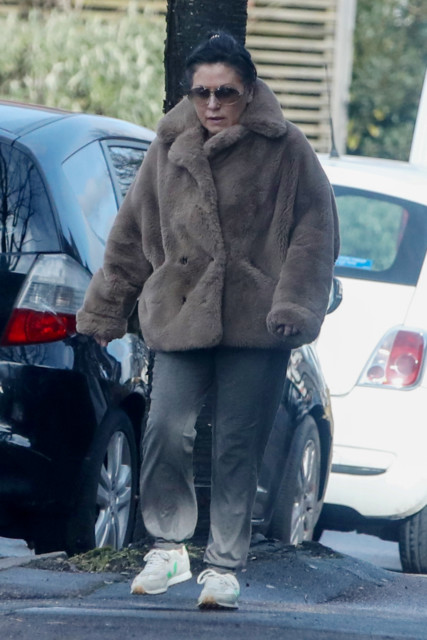 EASTENDERS actress Jessie Wallace took time out of her busy filming schedule to treat herself to some flowers in North London today.

It comes after last night, when fans were left blushing when her character Kat Slater stripped to her bra for racy romp with Phil Mitchell.

Today Jessie looked a world away from Albert Square as she browsed the shops near her home.

Dressed in a cosy coat, she looked happy and relaxed as she picked up some yellow roses.

The actress wore her raven hair tied back and had jogging bottoms on for comfort.

She was spotted popping in and out of local shops The actress was seen buying flowers in North London The soap star was browsing shops in her local area Jessie was seen going in and out of local shops She ended up buying a gorgeous bunch of yellow roses Last night’s episode saw Kat seduce Walford hardman Phil – who is played by actor Steve McFadden in the BBC soap – while he was meant to be having a romantic reunion dinner with his ex-wife.

However Sharon was left eating alone when Phil spotted her talking to a waiter and assumed she was flirting.

At that moment Kat turned up demanding he refund her for the car he had lent her – and things took a flirty turn.

Storming to the Arches, Sharon banged on the door screaming for Phil. Fans were stunned by the development

When he eventually opened up she said: “Just where Dennis used to hide, where Grant used to hide. Forgotten how to text, have you? Grubby little fingers can’t manage it?”

Phil apologised saying: “I’m sorry. I got as far as the door. I know we said dinner but I just couldn’t.

“Keanu and Ian. I just weren’t ready. Leaving you there like that I’m sorry you didn’t deserve that.” Phil realised he couldn’t forgive Sharon for her affair

However he did promise to get her the Vic, saying: “I’ll make sure you get the Vic. That’s your pub and no-one is going to take it away.”

But when he went back inside his words for Sharon were seen to be hollow as a barely dressed Kat stepped out of one of the cars.

The pair were clearly mid romp – and fans were in shock.

What is the triple lock pension and will it be scrapped?