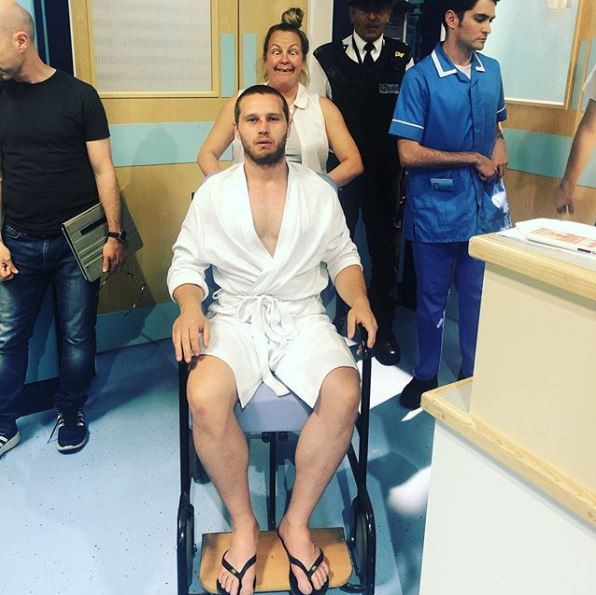 EASTENDERS actress Lorraine Stanley has posted a behind-the-scenes picture of her as Karen Taylor with injured son Keanu in hospital.

Last night, viewers saw the lad at the airport preparing to flee the country with a fake passport after leading the Mitchells to believe he’s dead.

But the new snap shows Keanu sitting in a hospital chair with cuts on his face wearing a white gown – leaving fans wondering if it’s an unseen scene.

The mechanic was supposed to go to hospital to get treatment for a gunshot wound after being blasted in the shoulder by a drunk Linda Carter.

However, as he returned to the soap last night, there was no mention of getting the horrific injury seen to.

It has left some viewers wondering if Lorraine’s shot could be a flashback with one commenting: “Just given away that keanu will get hospitalised.”

Another pointed out we didn’t seen this moment on screen, asking: “What’s this a scene from anyone?”

In the picture, Lorraine is seen making a funny face behind co-star Danny Walters, while dressed in character as Karen, as production staff and actors dressed as a cop and a nurse mill around behind them.

She posted: “I love you son @danny_walters no acting required in those eps!! Ive loved and learnt so much from working with you.

“Thankyou for inspiring me to be a better Actor,now go smash it up!!

In a reference to Little Britain’s wheelchair-bound character Andy Pipkin, she added: “What a laugh weve had

Keanu ran in to trouble with the Mitchells after it emerged he was the real father of Phil’s wife Sharon’s baby.

Ben Mitchell ordered his death on Christmas Day, with Martin Fowler blackmailed into carrying out the hit.

However, it never happened, with him and a drunk Linda Carter hatching a plan to make his death by merely shooting him in the shoulder on video – before letting him go on the run.

Hollyoaks’ Esther Bloom actress quits TV career to work on the frontline with the...

Cops to be given new powers to stop suspected foreign spies and assassins at...