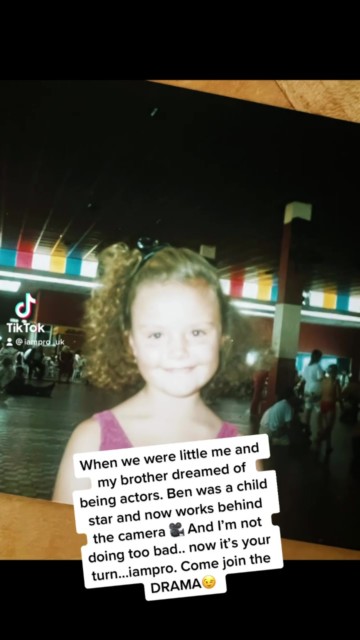 AN EASTENDERS favourite has shared a selection of sweet throwback snaps showing her with adorable corkscrew brunette curls.

The BBC One soap star, 41, took to her TikTok account to post an array of images showing her in a pink leotard, as well as sporting a retro tracksuit while playing board games.

An EastEnders stalwart has shared some adorable snaps from her childhoodThe soap star, now 41, is seen flashing a sassy look similar to her current character

A third image saw her playing in the pool with her sibling and father.

The star, who returned to Albert Square in an explosive storyline after murdering one of EastEnders’ best-loved characters, added the caption: “When we were little me and my brother dreamed of being actors.

“Now it’s your turn Iampro, come and join the drama.”

The celebrity in question is of course actress Charlie Brooks, who plays Walford’s meddling Janine Butcher.

One of her images saw the star posing side-profile, with her flashing an interrogative look similar to one that might be thrown by her diva character.

Last year, actress Charlie exclusively told HOAR she couldn’t be happier to reprise the role — even though playing scheming Janine means she will always be known as the woman who shoved Barry off a cliff.

Charlie said despite winning I’m A Celebrity and releasing a best-selling fitness DVD, the legendary soap death in 2004 is still the most talked-about moment of her career.

Believing car lot owner Barry had a short time left to live, devious Janine had married him in a rushed ceremony in Scotland — then was furious his illness was a false alarm and pushed him to his death.

Revealing what fans shout at her on the street, Charlie says: “‘You killed Barry!’ That’s the one I get the most.

“It used to be, ‘Here’s a tenner’ during the prostitution days. She’s been through a lot, this girl.”

That’s an understatement for the conniving daughter of Walford legend Frank Butcher, who was played by the late Mike Reid.

And, arguably worst of all, she had sex with Ian Beale while working as an escort.

In 2014, viewers saw Janine leave Walford for Paris to be with daughter Scarlett, having been shunned by Albert Square residents for getting away with killing husband Michael.

Seven years later, she’s back in Walford and ready to cause more mischief, and Charlie says viewers would be disappointed if her character was anything other than evil.

She explains: “People have an expectation of what they want and so do I, so you want to live up to that.” The star was seen playing with her family in a pool Rail commuters could face cap on trains after lockdown lifted