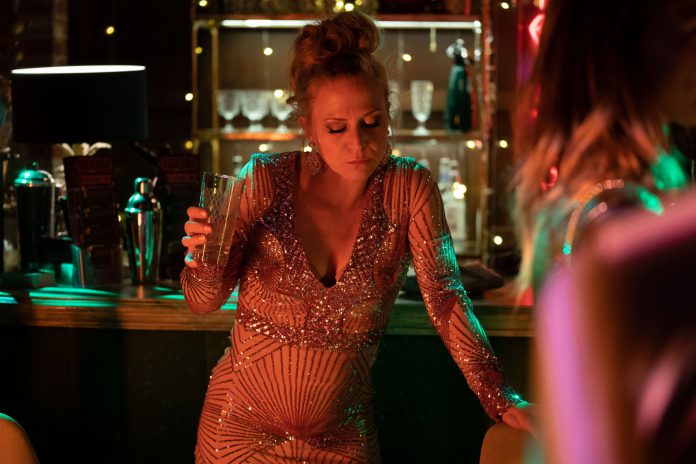 EASTENDERS actress Kellie Bright has opened up on the “dark and dangerous” fate in store for Linda Carter over Christmas time.

The character is completely unaware she has a drink problem, and is intent on enjoying a festive tipple before embarking on dry January in 2020.

Yet Kellie, who joined the BBC One soap in 2013, has told how the indulgence will lead to trouble.

In a chat with the Star’s TV Life magazine, she said things will get very heavy for Linda, in emotional scenes which come to a head on New Year’s Eve.

Talking of this show, which HOAR Online exclusively revealed would be aired from Linda’s viewpoint, she said: “When she’s drunk, you see a side to her that you’ve not seen before.

“I think her drinking gets as bad as it could.

“What she does while under the influence of alcohol is pretty horrendous.”

She added Linda’s Walford NYE is “pretty out there and unbelievable” as the drama unfolds.

Kellie added: “When I got the script, I could believe that an alcohol fuelled Linda would do all that stuff.”

The soap confirmed the harrowing alcoholismstoryline for Linda back in September.

“This autumn the Carters will face one of their biggest crises to date when Linda turns to alcohol to escape the increasing pressures of her family life,” executive producer Jon Sen said.

“Linda’s descent into alcoholism will be instantly recognisable to many a journey that begins with a single drink to cope with the everyday ups and downs but quickly escalates to a point which wreaks devastation on their life and the lives of those around them.

“In telling Linda’s story we hope that anyone in Linda’s situation or those around them notice the signs of alcoholism and seek the help needed.”

What time will the exit poll come out tonight and how accurate will it...

The Masked Singer’s Davina McCall hits back at troll calling her ‘old and wrinkly’...