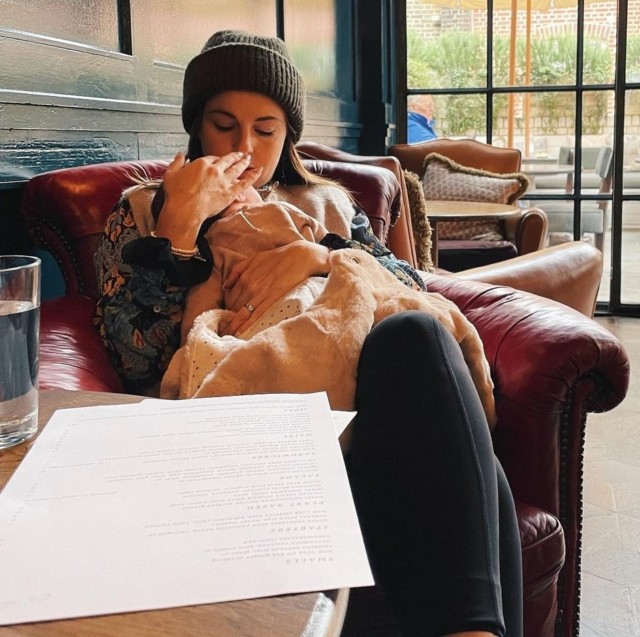 EASTENDERS star Louisa Lytton is shown cosying up to her newborn daughter Aura in a very rare picture of the tot.

Louisa – who plays Ruby Allen on the BBC One soap – said that the past seven weeks have been the “best of her life”.

The TV star held her daughter close to her chest and gazed adoringly at the little bundle of joy.

The tiny tot was wrapped in a fluffy pink jacket and a matching rose coloured baby-grow.

Tenderly holding her daughter, Louisa penned: “The best 7 weeks of my life

(would love a little 8 hour sleep though).”

Louisa’s pals were quick to comment on the heartwarming photo, co-star Gurlaine Kaur Garcha wrote: “How lucky is she to have you as her mummy.”

Another fan posted: “Awww so lovely

. The hardest yet BEST thing you’ll ever do!!! Enjoy being a mummy.”

Louisa recently explained the meaning behind her newborn daughter’s unusual name, and also opened up about her Covid battle shortly after becoming a mum.

The new mum revealed that it was Ben who chose the name – after they both spent her entire pregnancy convinced they were going to have a boy.

Speaking on Loose Women, she explained: “We had a shortlist of girls’ names and boys’ names, but we forgot about the girls’ names.

“Ben found it somewhere… When we then had her, it was such a shock to the system that we didn’t name her for the first few days because we hadn’t thought about it, so we went back to list and it seemed to be the name that suited her the most.”

The TV favourite also revealed that after a “long labour” she was forced to have an emergency C-section, and just as she was recovering from that she and Ben tested positive for Covid.

Louisa went on: “So it’s not been the best start, but she’s been fine throughout, so that’s all we can ask for really.

“Because we got Covid so soon after having her, we’ve had hardly any visitors yet, which is a shame, but everyone [from EastEnders] has been in touch and I’ve been sending photos.

“Now the doors are open, I’m sure people will be coming to visit, which will be really nice.”

And discussing how she has adapted to motherhood, Louisa told the Loose ladies: “I just don’t think anything prepares you. I read every book, I spoke to every friend and she’s the best thing that’s ever happened to us, but it is tough.

“Ben’s been amazing. Even throughout the labour, I was so fortunate to have them there.

“Obviously there’s been a time where women had to do that on their own, which is horrendous, but since we’ve had her, I am feeding, so that’s pretty much the only thing he can’t help out with – everything else, he’s been amazing. He’s a very hands on dad.”

Louisa and Ben hope to get married next year after being forced to postpone their 2020 nuptials due to the pandemic.

The star shot to fame playing ruthless Ruby Allen in EastEnders, with her character’s final scenes airing last month as she went on maternity leave. Louisa plays Ruby Allen in the BBC One soap

Viewers convinced they know who will be voted out in first I’m A Celeb...

The Queen has a subtle way of letting you know that she doesnt like...