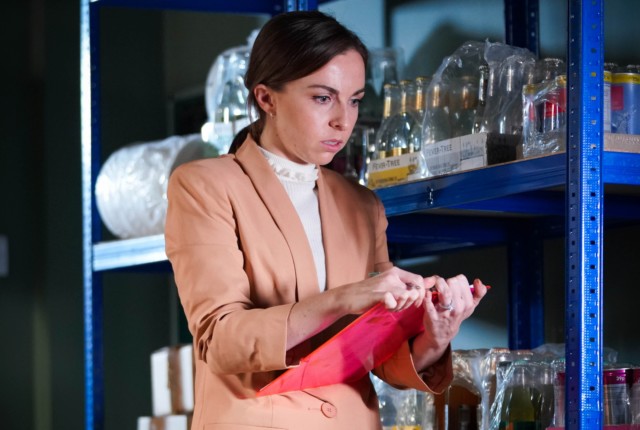 Ruby – who is played by Louisa Lytton in the BBC One soap – suffered a tragic miscarriage on Friday night but decided to keep it a secret from her husband Martin.

Ruby blames Stacey for her miscarriage next week

When Stacey later arrived at the club to confront Ruby over the holiday she and Martin had planned with his kids, the argument took a nasty turn and Ruby accidentally toppled down the stairs.

And now it looks like Ruby – who has been scheming to keep Martin away from his ex-wife Stacey for months – is set to accuse Stacey of pushing her and causing her miscarriage.

Speaking about the reasons behind her “really sad” lie, actress Louisa told HOAR and other media: “Ruby has always been desperate to be loved. She’s been very lonely from a young age so i think she makes very irrational decisions and is quite selfish because she hasn’t really had anyone else around her to teach her morally and things like that.”

She added: “I guess she is just desperate for Martin. She actually loves him. I think he’s probably the first person she’s actually loved, and some women will do anything for love. I think in her mind she genuinely believes they are supposed to be together and that Stacey is in the way. She wants what she wants.”

Louisa continued: “It’s really sad. She makes terrible decisions and she’s almost not a very nice person but it’s really sad when you think about where it’s come from and what she’s been through.”

Viewers know that Ruby has been going to great lengths to keep Martin away from Stacey for months after fearing he’d turn back to her. Ruby tells Martin that Stacey pushed her and caused her miscarriage Fans were shocked when the club owner paid Kush to take Stacey’s son Arthur away from Walford in a cruel move.

Ruby then pretended to be pregnant to trap Martin, before realising she was carrying his baby after all when Stacey guessed she was lying and forced her to take a test.

Speaking about whether Ruby doubts Martin’s love, Louisa said: “I think Ruby has always known deep down that Martin will always love Stacey. They will always be the couple. “As desperate as she is for him to love her I think there’s loads of insecurities around Stacey and there forever will be.”

Next week, Ruby breaks down when the doctor tells her that she’s been haemorrhaging from her miscarriage and that she’ll need a procedure.

Meanwhile, Stacey battles a guilty conscience following the accident and tries to apologise to Ruby.

But it all kicks off as Ruby announces to Kush and Martin that Stacey pushed her down the stairs – and caused her miscarriage.

Ruby also explains how Stacey and Kush locked her in her office and made her do a pregnancy test, leading Martin to fly into a rage and punch Kush.

Kids losing out on education is one of the biggest outrages of the Covid...