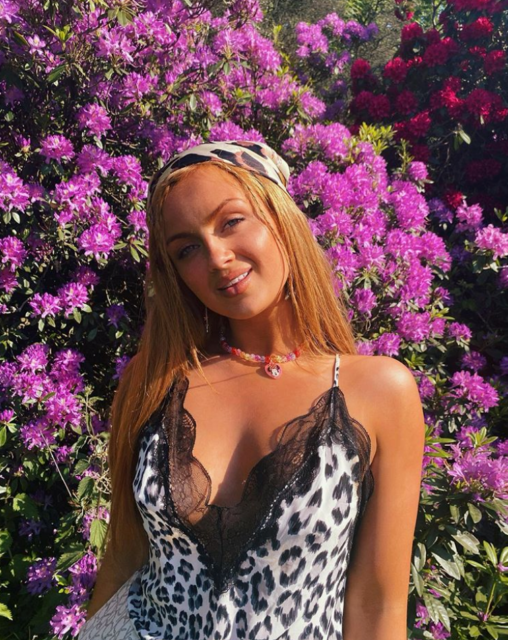 EASTENDERS star Maisie Smith sizzled in a leopard print top for a stunning snap on Monday.

The actress, 18, looked a far cry from her Walford character Tiffany Butcher as she wore the plunging top and thanked her mum for her photography skills.

Posing outdoors, Maisie slipped into the silky cami and donned a matching headband, teaming the look with a colourful necklace.

She kept her hair poker straight and wore a sweep of lipgloss as the sunshine bounced off her glowing skin.

She said: “You do take some lush pics @scarlettrsmith”

As well as her sizzling photos, the soap star is no stranger to showcasing her home in selfies and Tik Toks, many of which include her mum. Maisie has given a glimpse of her home to fans

Her house has some impressive views of the sea form her home in Westcliff, Essex.

Good enough views to keep her dog entertained, who can stare out from the wooden stool in her bedroom.

There are wooden floors throughout her house, including her comfy living room.

The lounge has a fireplace, with decorations lining the top and a mirror. There are big brown sofas to sink into too. Maisie in her living room Her mum often joins in the Tik Toks There is plenty of space to pose in the house

The kitchen has white cupboards with black surfaces and a tiled wall above the metal oven.

There’s space throughout, with an attic bedroom complete with a skylight.

The garden has space to sit and a fire, to keep those windy and cold nights at bay.

Maisie shows off her house – and her lookalike mum – in videos she uploads to social media. A look at Maisie’s kitchen The star lives with her parents A look at the view outside her window Good views for her dog

During a dancing video yesterday, the pair danced, before turning it int a comedy coronavirus skit.

It came after Maisie opened up about wishing she was thinner as she battled body dysmorphia aged 13 in an emotional self-penned song. Maisie in one of the bedrooms She makes use of the mirrors for post-workout selfies In her loft bedroom There’s a skylight over the bed There’s plenty of outside space With a fire for heating too

Did you miss our previous article…
https://www.hellofaread.com/soap-opera/coronation-street-spoilers-gary-windass-panics-as-imran-questions-kelly-about-her-dad-rick-neelan/

Scots will have to carry on wearing face masks for ‘some time’ in pubs...