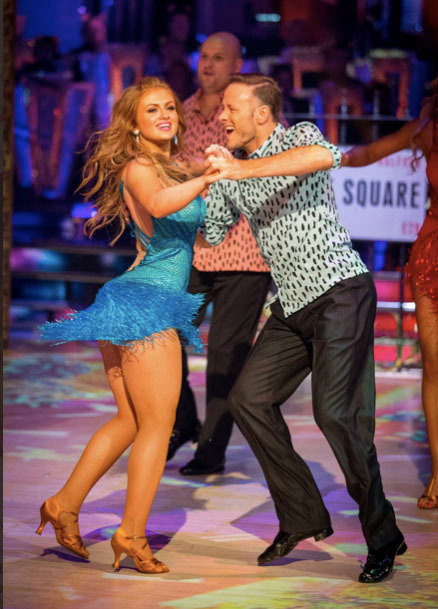 EASTENDERS actress Maisie Smith could be heading for the Strictly Come Dancing ballroom.

According to bookies the redhead beauty stands a good chance of appearing on the show after impressing fans with her moves on TikTok.

Maise on Strictly for Children In Need last year

The teen star has been delighting followers on the social media app during lockdown – and this could lead her all the way to the Strictly dance floor according to Ladbrokes.

The bookies make her just a 2/1 shot to appear on the next series of Strictly Come Dancing – although its format is still up in the air due to the pandemic.

Alex Apati of Ladbrokes said: “Strictly chiefs love getting soap stars on board and Maisie Smith may well be the next to take to the dance floor.”

Maisie won last year’s Strictly’s Children in Need special after impressing fans with her hidden dance talent and looks set to be back for more. She told Tess Daly and Claudia Winkleman: “I had the most amazing week, I couldn’t have asked for a more wonderful team by my side, it’s just been amazing.”

The 18-year-old Eastenders actress has been keeping her followers entertained with impressive videos in recent weeks, and the latest one is no exception.

The child star first joined the BBC One soap as Tiffany Butcher in 2008 when she was just seven years old. Now at 18, Maisie describes herself as an actress and recording artist who enjoys posting videos of herself singing on Instagram.

She documents her glamorous life giving fans a sneak peak inside her life when she’s not filming EastEnders.

As well as her sizzling photos, the soap star is no stranger to showcasing her home in selfies and Tik Toks, many of which include her mum. Maisie and her mum on TikTok

She had her followers in stitches with her TikTok video with her mum, where they were dancing to Britney Spears’ Toxic.

Maisie takes her health and fitness seriously and regularly posts snaps from the gym.

Despite being so young, she’s already enjoyed a successful career since starting off in stage school as a youngster.

In addition, Maisie has been delighting fans with videos of herself working out, painting, and even singing – including an emotional self-penned song about her battle with body dysmorphia.

Who is Jamie Lomas and how old is he?