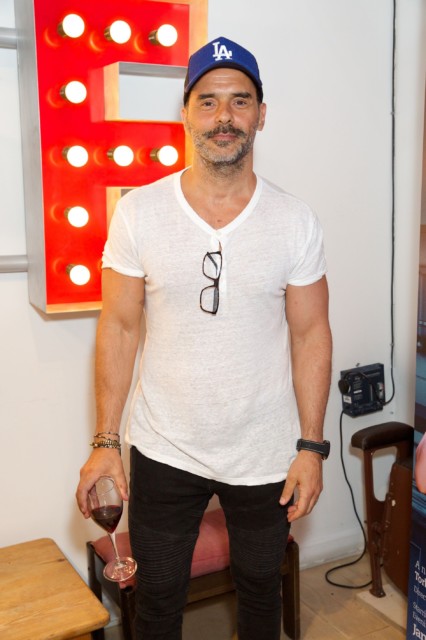 FURIOUS EastEnders star Michael Greco has told HOAR he is being blackmailed by a lookalike hacker – and fears photos of his son have landed in the wrong hands.

The 51-year-old actor – who welcomed adorable Gianluca into the world in July – has fallen victim to a devious hacker who is posting bizarre snaps of himself on the star’s Instagram page.

Over the past 48 hours Michael’s 52,000 followers have been bombarded with photos of a man with similar facial hair and appearance.

Writing in a statement to HOAR, Michael shared: “As everyone can see, I’ve been hacked.

“And whilst in the big scheme of things, it’s just a social media platform for my partner and I, it is deeply personal as this person has access to our son Gianluca’s photos.

“This feels deeply intrusive. Especially as he was seriously ill and in the ICU in Great Ormond Street for the first 7 weeks of his life. I’m sure, like so many other people in the public eye, I’ve been contacted by the person saying if I pay money they will hand back the account.

“Pure and utter blackmail. Ordinarily, for me I wouldn’t care but I feel deeply protective over my son.

“I have spoken with Instagram and they are helping.

“In the meantime anyone getting friend requests, requests for money under my names please know it’s not me.”

Michael, best known for playing Beppe DiMarco, became a father for the first time in July and was left wrecked with worry after Gianluca required specialist medical treatment.

The little one had to undergo surgery and spent weeks in hospital, but was eventually discharged – with proud Michael continuing to share updates from home.

Michael was catapulted into the spotlight playing gravel-voiced loverman Beppe Di Marco on EastEnders between 1998 and 2002.

At the height of his fame, he was voted Soap’s Sexiest Male at the British TV Soap Awards and the Sexiest Male Soap Star ever by readers of the Radio Times.

After EastEnders, the soap star made the switch to Casualty in 2017, where he played Phil Paterson, a copper called to the Emergency Department to arrest a troublemaker.

At the time, he announced that he was joining Casualty on Twitter where he praised the show’s “incredibly high standards”.

Aside from BBC dramas, he also appeared in 2006 movie Naked in London with fellow ex-EastEnder Jake Maskall, who was Jake Moon.

Yet, Michael has put his acting career on hold and is a big name on the professional poker circuit. Fans have been left furious by the hacker The actor with his partner Helen Harris Michael as Beppe in EastEnders alongside Martine McCutheon’s Tiffany The star is best known for playing hunky Bepe in EastEnders

Prince William and Kate told Kate Garraway they want to give her ‘a hug’...

Eat Out To Help Out ‘extended’: Which restaurants are still doing the discount in...