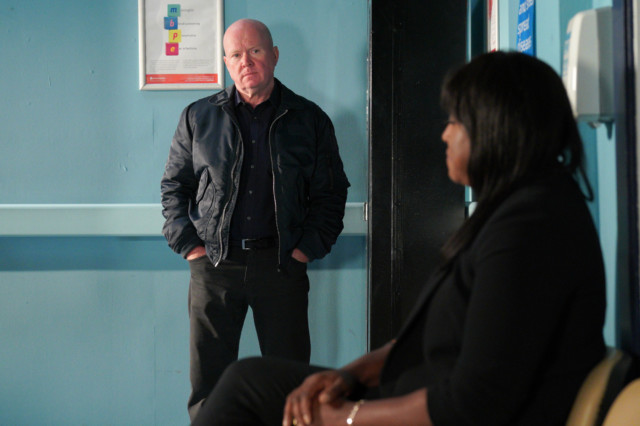 PHIL Mitchell vows to reconnect with his long-lost Son Raymond next week in EastEnders after he is orphaned by a fatal car crash.

Denise wants to keep Raymond – the child she gave up for adoption following a one-night stand with Phil in 2016 – as far away from his biological dad as possible. But will she succeed? Here’s the lowdown…

Phil vows to fight for Raymond next week in EastEnders

What do we know about Phil’s fight for Raymond?

This week, Denise made the difficult decision to stop visiting Raymond in hospital, after realising she could never risk Phil being part of his life.

But spoilers have revealed that Denise’s sacrifice will be for nothing as next week’s episodes will see Phil become aware of the car crash tragedy.

The upcoming scenes will see Phil ask Callum to look into the family that adopted Raymond.

Meanwhile, Thompson tells Callum that the listening device isn’t doing enough – and that he wants him to wear a wire to dig for dirt on Phil.

Later, Callum tells Phil that he couldn’t find anything about Raymond’s family, but that he’s happy to look into some of his ‘contacts’ if that would help.

But Phil isn’t interested and heads off to the hospital, where he vows to bond with Raymond.

Phil then strikes up a conversation with Ellie and lies about who he is and why he’s there. Will Denise keep Phil away from Raymond?

Denise made the decision to keep Raymond far away from Phil during Monday night’s episode of EastEnders after she watched the hardman rage at Isaac over Amy’s drug use allegations.

Denise was forced to step in and defend Isaac from Phil, before reminding him of his own history with drug addiction.

Denise then made the heartbreaking decision to let Raymond stay with his adoptive grandmother Ellie Nixon.

EastEnders fans are convinced that keeping Raymond away from the toxic Mitchell family is for the best.

One viewer tweeted: “Denise ripped into Phil and not one lie was told. Keep him away from Raymond. It’s that kid’s only chance. Look how his big brother turned out. I love Ben but…no. #EastEnders #ProtectRaymond.”

#EastEnders I’m not shocked @ Denise choosing to keep Phil out of the Raymond situation. She knows the Mitchell family is toxic on their best day. pic.twitter.com/2HgUqSXcOS

But whether Denise succeeds in keeping Raymond away from Phil remains to be seen, and viewers will have to tune in to find out whether he can be stopped. What do we know about Denise and Ellie’s fight over Raymond?

EastEnders newcomer Mica Paris has warned that Ellie won’t give up the Raymond without a fight – and that she’s about to clash with Denise over the toddler.

Speaking about how things turn nasty in the coming weeks, Mica told Inside Soap: “It’s a tug of war!”

Producer Jon Sen previously teased there is a ‘great’ storyline in store for Denise, and that it will be connected the arrival of Mica Paris’ character Ellie Nixon.

He told Metro.co.uk: “It really pushes Denise to the front of the show. Those Trueman stories are amazing. Mica forms part of that story with Denise.

“Anybody who knows anything about her history will probably know where we’re going with that. It’s great when the past comes to haunt you.”

Employers may only hire workers with coronavirus antibodies in future – and Brits might...

Im A Celebs Jacqueline Jossa and Kate Garraway break down in tears as they...

EastEnders star Clair Norris looks worlds away from character Bernadette as she does gym...