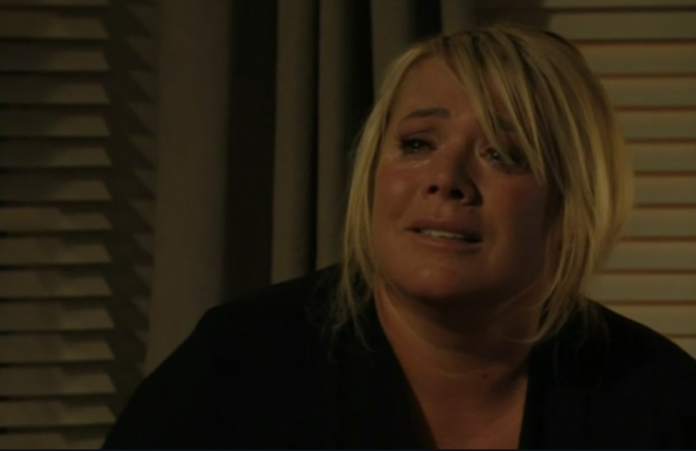 EASTENDERS has hinted Sharon Mitchell may reunite with ex Phil – after trying to kill him in tonight’s episode.

The businesswoman – who is played by actress Letitia Dean in the BBC soap – warmed to Phil tonight after initially blaming him for her son Dennis’ death.

Sharon initially lashed out at her ex

Phil made a shock return in the middle of Dennis’ wake to speak to Sharon but she was in no mood for him.

She told him: “I just said goodbye to my son. The boy you killed. It’s your fault that boat went down.

Grabbing a knife from the buffet Sharon went for Phil, screaming: “Get out. Get out. I will rip your heart out. You killed him. You killed my boy.” As Kathy and Ian took her home, Phil followed but Kathy warned Phil that if he hurt her he would regret it to which Sharon said: “I’m not the one who needs protection.”

Phil tried to convince Sharon that he loved Dennis too, Sharon told him she always loved Dennis Rickman sr more.

She spat at him: “He’s the one I picture when I close my eyes last thing at night, he was beautiful, you took him, and he gave me a son and you took him too. I was only with you for security, turned out well, didn’t it?”

Sharon then broke down in devastation and Phil left but later they reunited and had a touching heart to heart about Denny and their own relationship. The sweet moment gave fans hope for a reunion

As Sharon fell asleep, Phil touchingly kissed her on the head, giving fans hope of their reunion.

One wrote: “Sharon and Phil are gunna get back together and take over the Vic. Mark my words.”

A second said: “Is it bad I really actually hope Sharon and Phil get back together?”

Another added: “I’m proper loving these Phil and Sharon scenes and dare I say it, I feel a bit bad for Phil.”

Michelle Keegan flashes toned abs as she cosies up to husband Mark Wright on...

Xbox could BLOCK PS5 players from these games after Activision deal

Harry and Meghan: An African Journey Air date, time, trailer and what is...