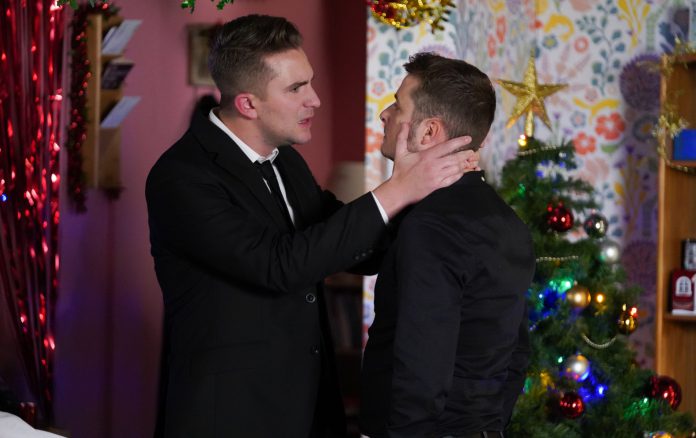 EASTENDERS’ Callum Highway is set to confront boyfriend Ben Mitchell after growing suspicious he’s gone back to his criminal ways.

Ben, who is played by Max Bowden, previously promised Callum he would leave his criminal past behind him so he could join the police force.

However, Ben has since reverted back to his old ways to help dad Phil.

Ben promised his dad that the father of Sharon’s unborn baby “will not outlive Christmas.”

In Friday’s episode, Callum becomes suspicious of Ben’s antics and confronts him face-to-face.

Ben doesn’t appear to take Callum (Tony Clay) seriously as he grabs his face in the tense shots.

Ballum are set to come to blows during Friday’s episode

Is it all over for the couple?

Ballumss road to romance has been anything but smooth.

The pair first slept together while Callum was still hiding his sexuality and engaged to Whitney Dean.

The BBC soap have teased there could be heartbreak for the couple after new spoiler pictures emerged this week.

In the snaps, the pair are seen having a tense discussion out on the Square on Christmas Eve .

Callum hands Ben his Christmas present, but his cold stare suggests theres bad news for the boys over the festive season.

But with exact details of the conversation being kept firmly under wraps, fans will have to tune in to find out whether its the end of the road for the couple.

Eco-warriors Meghan Markle and Prince Harry fly back to California on private jet after...

Best TV for your PS5 and Xbox Series X – what you need for...