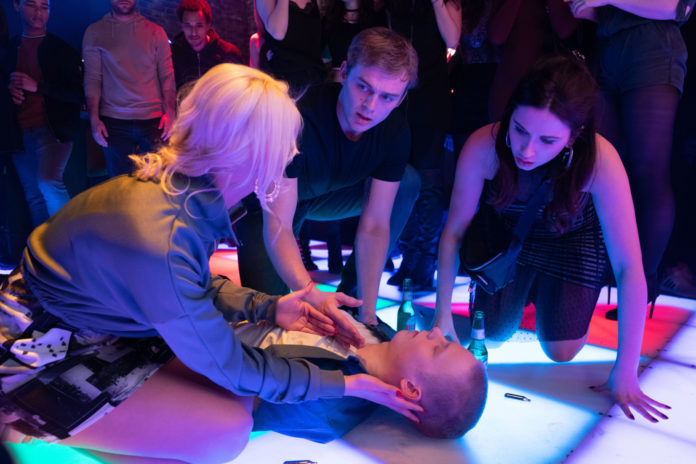 EASTENDERS Bobby Beale is set to collapse in a drug-induced state after his crush Dotty kisses his brother Peter.

The teenager – who is played by actor Clay Milner Russel in the BBC soap – has turned to drugs once before to quell the visions of the sister he murdered as a kid.


Bobby collapses after taking drugs to deal with Dotty’s rejection

EastEnders fans will remember when Bobby veered out into the train tracks in a drug-induced state last year.

The youngster had been struggling in despair after returning to Walford and was being haunted by visions of his dead sister Lucy.

Thinking drugs might make the hallucinations go away, Bobby took some to try and dull his pain before heading to the nearby train station.

The ghost of Lucy then motioned for Bobby to follow her as he wandered out onto the train tracks.

Luckily, Bobby was saved from death by a gallant Callum Highway who stopped him getting hit by a high speed train in the dark tunnel.

Fans know that Bobby then converted to Islam to cope with his killer past but things only worsened for him when he became embroiled in a brutal bullying storyline that eventually saw him rushed to hospital after a vile Islamophobic attack.

The attack came after his own Dad threw him out after making slurs about his religion.

In upcoming scenes, the troubled teen is set to turn back to drugs to try and dull the pain when he’s rejected by Dotty – who he fancies his chances with. Peter and Dotty kiss in front of Bobby

Next week’s episodes of EastEnders will see Dotty start promoting a club night at Ruby’s with Vinny.

When Phil refuses to give Dotty a pay rise, she flirts with Peter and invites him to the party.

Bobby is gutted to realise that he’s not old enough to go to the club night, but decides that he won’t let his age stop him pursuing Dotty.

Kathy then realises Bobby has a crush on Dotty and encourages him to spend more time with her – much to Ian’s dismay.

Later in the week, Peter clocks Bobby’s plans to sneak into the night club and assumes he must have a crush on Dotty. Bobby has developed a crush on Dotty

Peter then gives Bobby a reality check and knocks his confidence, telling him Dotty would never be interested.

Later at the club, Bobby tries to buy laughing gas from Dotty but she refuses.

He then tries to buy her a drink but is gutted when he realises Peter has got there first.

A distraught Bobby then follows one of Dotty’s customers and as Dotty and Peter start to kiss, Bobby collapses.

What has he taken and will he survive?

Prince Harry honours the Queen for ‘dedicating life to service’ & praises Philip for...

When did Brooke Vincent give birth, what is her sons name and is she...

Meghan and Harry latest – Duke and Duchess’ wreath laying was a ‘publicity stunt’...

FTSE 100 edges up as Oxford vaccine approved by regulators