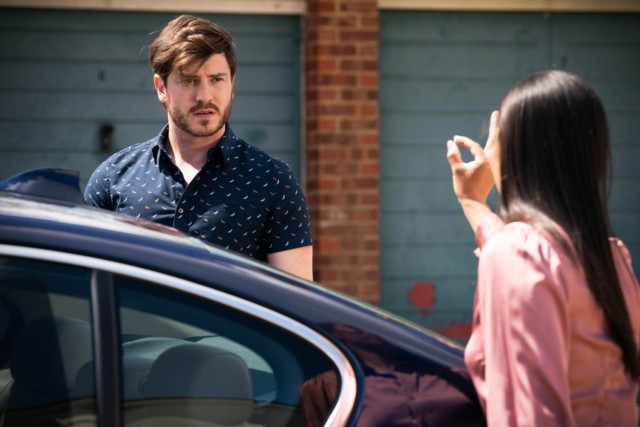 CHELSEA Fox discovers proof that Gray Atkins murdered Tina Carter as they romp in his car next week in EastEnders.

The solicitor – who is played by Toby Alexander Smith in the BBC soap – killed Tina after she discovered he was an abuser who murdered his wife Chantelle.

Next week’s episodes of EastEnders will see Karen tell Chelsea, who’s dating Gray, that she should be making more effort with the kids.

Gray overhears and suggests taking them shopping as Mia needs a new dress for her birthday.

But when Chelsea neglects Mack and Mia at the market, Whitney notices and steps up, offering to fix Mia’s old dress free of charge.

Later, Mia shows off her dress as Karen admits she must have been wrong about Chelsea.

Later in the week, Chelsea’s hold on Gray grows as she persuades him to skive off work.

They meet her friend with her van full of dresses to pick an outfit for court, and Gray realises the dresses must have been stolen.

Chelsea distracts him by luring him into the back of his car.

When Chelsea spots an earring, Gray realises with horror that it belongs to Tina.

Viewers know that the walls are already closing in on Gray after his boss Laura Awowinka dropped the bombshell that she knows he’s an abuser.

Laura got Gray drunk in recent scenes so he would embarrass himself at a works drink by offering him a free bar.

Laura later spoke to Chelsea at Gray’s house, warning her that the lawyer abused Chantelle – and that he was probably looking for his next victim.