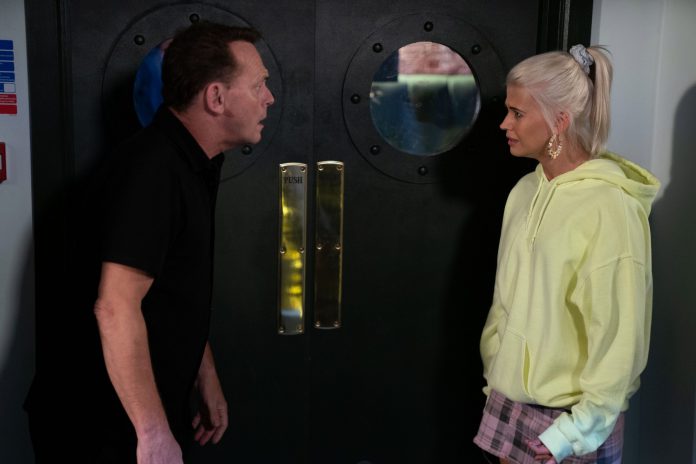 LOLA Pearce will launch an emotional appeal to Jay Brown in EastEnders next week as he remains determined to get revenge on Terry Bates gang.

Jay whos played by Jamie Borthwick in the BBC soap is planning on getting revenge on Terry, who was responsible for the death of his dad Jase, at his funeral.

Hell be seen brushing off Lola Pearces concerns about the funeral. Lola (Danielle Harold) will then quiz Billy Mitchell who leaves her stunned when she learns what Jays planning.

A worried Lola reaches out to Ben Mitchell (Max Bowden) for help, but Ben seeks out Jay and makes him a surprising offer.

When the day of Terrys funeral rolls around, Lola desperately tries to make Jay see sense, but despite her pleas to help stop him, Ben takes matters into his own hands.

Will Jay go through with his plan?

Meanwhile, EastEnders fans are terrified that Jay could end up losing his life in his revenge mission.

Jay is desperate to avenge his father’s death

Terry relentlessly targeted Jase when he tried to cut ties with his former gang to focus on his family.

Jay was left seething last week when he saw the request for an elaborate send off for the villain, and vowed he wouldn’t grant his family’s wishes.

Worried viewers took to Twitter to share their fears, with one writing: “Really hope Jay doesn’t end up getting killed off, he is a brilliant actor! #EastEnders #TerryBates.”

Another posted: “As if things couldn’t get any worse for Jay

Terry Bates comes back to haunt him

Ben Mitchell is taking over the business after Jay moves aside

A third shared: “Past has come to haunt him so trouble time ahead #EastEnders.”

The drama unfolded when Callum Highway and Jay opened a casket to reveal Terry’s body.

Judging the look on Jay’s face, Callum asked if his pal knew the man.

Jay replied: “Know him? This is the man that killed my dad.”

Overwhelmed with emotion, Jay tore down the Brigade Boys flag and vented: “That man stabbed my dad and watched him die. No gold rings, no watches, no banners, no whisky, no 200 people clapping him anywhere.”

But Jay decided he could turn the situation around to get revenge, and was heard telling lifeless Terry: “So you can keep your watches and rings, they can clap you in, but the time this funeral is over and they all go home theyre gonna know it was for an old scumbag like you.

“Theyre gonna hear what man you really were, whether they like it or not.”

Emmerdale’s Claire King cleared to return to soap after being written out during the...

Dan Osborne angrily lashed out at Im A Celebs Myles Stephenson after he told...