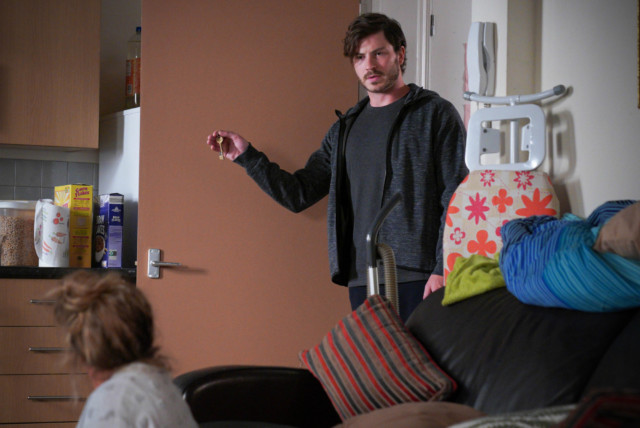 EVIL Gray Atkins manipulates Mitch Baker into thinking he’s to blame for Chantelle’s death next week in EastEnders after he catches him kissing Karen.

Chantelle met a tragic end last week in the BBC One soap when her abusive husband Gray impaled her on an upturned knife in the dishwasher as she tried to escape.

Gray walks in on Karen and Mitch kissing

Gray then got busy covering up the scene and making it look like Chantelle had slipped on one of the children’s toys – as she bled out slowly on the kitchen floor and begged Gray for help.

The evil lawyer had spent months convincing Chatelle how sorry he was every time he abused her as the soap’s domestic abuse storyline continued to escalate – and even managed to manipulate her into apologising to him after he broke her arm.

And conniving Gray will continue to manipulate the situation to suit his own ends this week on the soap as he points the finger at Kheerat after being questioned by the police. Next week’s episodes of EastEnders will see a desperate Gray turn his attention towards Mitch.

And when Mitch offers to help her, it’s not long before the pair start reminiscing about Chantelle and end up in tears.

But disaster strikes as a furious Gray walks in just as Mitch and Karen lean in to kiss each other.

Later, Gray and Mitch discuss what happened and Gray manipulates the situation to his advantage, telling Mitch that he turned Chantelle against him.

When Gray calls Mitch a terrible father, he starts to believe Gray and breaks down in tears over Chantelle’s tragic death.

Does Gray have Mitch under his thumb, or will Chantelle’s dad start to see the cracks in Gray’s story?

Talking about the domestic abuse storyline, Toby Alexander-Smith – who plays Gray – said: “I think that it is important that it concludes in such a tragic way.

“As shocking as it is to watch hopefully it will give the survivors out there the courage to reach out and get help.”

Brexit negotiators scoff late night pizza as ‘good chance of a deal in next...