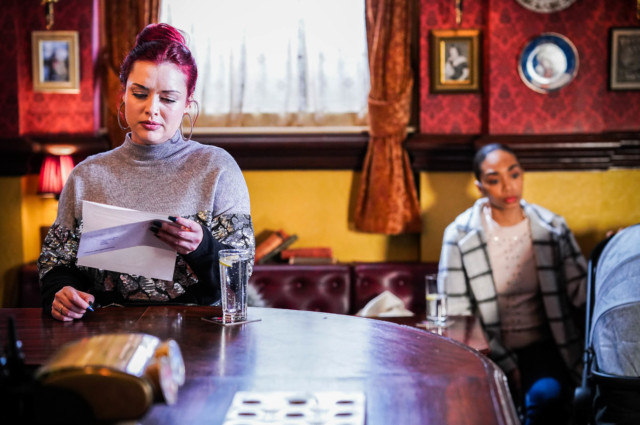 The EastEnders villain drops a bombshell on her, as she’s considering putting their son up for adoption.

Chelsea (portrayed by Zaraah Abrahams) has a lot on her mind, particularly after her husband Gray was arrested for murdering his first bride Chantelle, Tina Carter and Kush Kazemi.

Taken away from Walford and thrown in prison, the criminal has wreaked havoc among Albert Square residents – to the point where Chelsea has decided to get their son Jordan adopted.

But there’s some bad news coming in through Chelsea’s mailbox next week as she receives a distressing letter from Gray.

The beautician is shocked to read that Gray refuses to keep paying the mortgage for No.1 Albert Square, potentially leaving her with a devastating foreclosure and a whopping debt.

This could make Chelsea unable to put Jordan up for adoption, as the process is long and costly. Thankfully for her, Whitney Dean (Shona McGarty) is still willing to fly to her rescue.

She suggests Eve Unwin (Heather Peace), a former lawyer before she was eventually sent to prison, could offer some advice.

Whitney then offers to move in to help Chelsea.

Aside from these worries, the adoption process continues to play on Chelsea’s mind.

Her mother Denise is set to find out about Jordan’s adoption next week, as Chelsea is caught red-handed during an appointment with a social worker.

Chelsea made her decision last week but the reason for Jordan’s adoption surprised many EastEnders viewers.

As she told Whitney upon making her mind up, Chelsea is planning to put her son up for adoption to make sure nothing bad ever happens to him again.

Just like Chantelle before her, Chelsea was brutalised by Gray during her marriage to him.

Gray’s behaviour reached nasty levels when he tried to strangle Chelsea after she recorded him confessing to his villainous actions.

He had also tried to kidnap Jordan and take his eldest children, Mack and Mia, away from the Square as he was plotting his escape from the police.

But as BBC One viewers know, Gray wasn’t able to escape this time as many residents turned on him when Whitney worked out he killed Tina Carter.

What will Chelsea do? I had mansion, clothes & dream wedding but I was suffering, says ex-Man Utd WAG

Can Whitney really help her? But how can Whitney help her this time?

Queen Elizabeth news – Humiliation as Her Majesty serves tea to oblivious builder who...

Best Celebrity Fortnite skins: Who are the top celebs to appear on the game?

Most Brits reckon Sir Keir Starmer would have done no better than Boris Johnson...