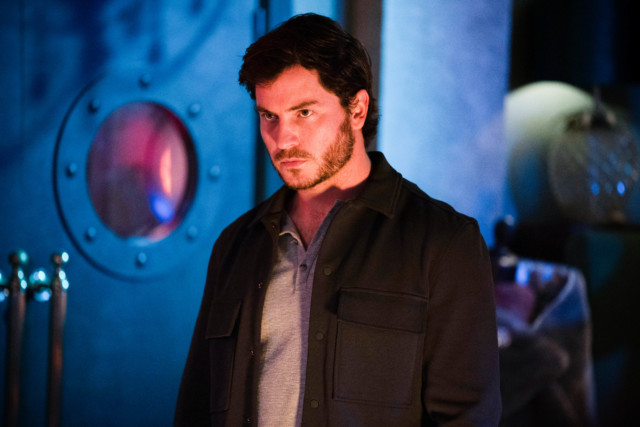 GRAY Atkins is suspicious of Chelsea Fox’s behaviour and is determined to keep her and their son Jordan by his side.

The serial killer goes to unbelievable lengths to do so by installing security cameras and making a dreadful decision.

Is Gray (Toby-Alexander Smith) closing in on his wife Chelsea (Zaraah Abrahams)?

Following the birth of their son Jordan, the lawyer’s fatherly instincts have kicked and he appears set on keeping his third child close.

In upcoming episodes of EastEnders, due to air next week, starting from January 17, Chelsea attempts to cut all future ties with Gray by signing Jordan’s birth certificate, following Whitney (Shona McGarty) and Kheerat’s (Jaz Deol) advice.

However, Gray is one step ahead of her and manages to register their son’s birth, gifting a framed copy of Jordan’s birth certificate with his name on it to a deflated Chelsea, who refuses to eat.

Another hurdle for Chelsea to overcome in her attempts to leave the lawyer, which only discourages the beautician.

This leads to her mother Denise to recommend that Gray sees a GP in the hopes that Chelsea can get help.

Chelsea has been putting up a fight against Gray in recent weeks.

After finding out what came of Chantelle, Gray’s first wife, during their Christmas Day wedding (December 25, 2021), Chelsea has been adamant on leaving and exposing the father of her son.

She has been able to count on Whitney’s – who revealed to her the abuse Chantelle endured for years at the hands of Gray – unwavering help and support.

Both women have had to remain undercover, with Whitney encouraging Chelsea to keep the peace before they expose him.

Next week, Chelsea will do everything she can to register Jordan’s certificate alone.

But after she raised his suspicion, Gray has installed cameras within their home, tracking her every move.

He is therefore able to tell when Chelsea is lying about going out to buy milk while he was at The Vic with Kheerat.

In reality, the latter was trying to buy Chelsea some time to giver her a slim chance of getting her passport so she can register Jordan’s birth alone.

Kheerat has also been a part of Whitney and Chelsea’s plan, as he was romantically involved with Chantelle before her demise in September, 2020.

Will Chelsea be able to free herself from Gray once and for all?

What will be her, Kheerat and Whitney’s next step toward exposing Gray?

Tune into BBC One to find out. Since then, Chelsea has tried to free herself from the serial killer

Did you miss our previous article…
https://www.hellofaread.com/soap-opera/doing-dancing-on-ice-is-scarier-than-climbing-up-mount-everest-says-coronation-street-star-sally-dynevor/

Seven huge Coronation Street spoilers for this week as the truth catches up with...

Brits face extra £1,000 on annual water bills if dumping sewage in rivers is...