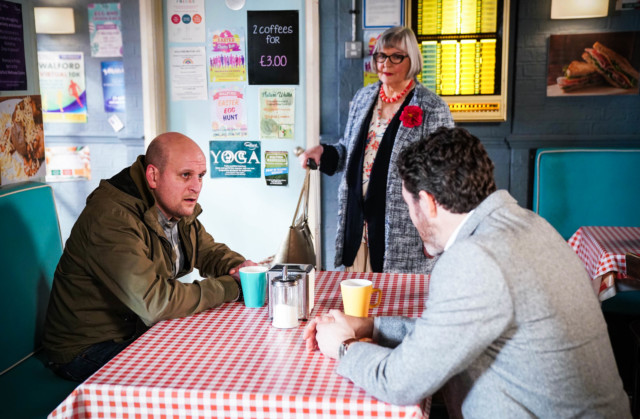 WHILE some would rather leave Walford behind altogether, one character will be returning to the Square.

Upcoming scenes of EastEnders tease a surprise for Stuart Highway as his grandmother Vi comes back.

Vi Highway returns to the Square

Walford hard man Stuart (portrayed by Ricky Champ) has been unwilling to seek treatment as he continues to battle male breast cancer.

But one person should be able to set him straight – his grandmother Vi Highway.

In an unexpected twist, actress Gwen Taylor will be reprising her role as Stuart and Callum’s grandmother.

Scenes due to air on our screens Thursday, March 31, she is set to immediately reach out to Stuart in a bid to help him face the music. I’VE BEEN A FUEL

Stuart has relied on his wife Rainie (Tanya Franks) for support, although he has also pushed her away.

He even ran away from the London borough, too scared to go through surgery.

However, whether Stuart chooses to listen to her remains to be seen as their relationship has been rocky as of late.

BBC One viewers remember Vi left Albert Square back in November while on bad terms with her grandson.

Stuart had then found out Vi had another son who she gave up for adoption years ago.

Gwen Taylor first came to the Square for Callum’s wedding to Ben Mitchell, in May.

The quick-witted character left residents with a bad impression due to her remarks which caused a lot of trouble.

Vi only had a brief stint in Walford as she left in November.

She packed up and left when her son Jonno kicked her out, as he didn’t approve of Callum’s wedding, and sold her things.

When Kim Fox got her hands on an antique children’s book, which she bought from Billy Mitchell’s market stall, Vi panicked.

The book contained a picture of her during her pregnancy and she revealed she fell pregnant at 51 years old after a one night stand.

She gave birth to a boy named Christopher who had Down syndrome and put him up for adoption soon after.

Stuart was unable to forgive Vi for what she had done.

How will Stuart react to his grandmother’s return to the Square? Can Vi persuade Stuart to get help for his breast cancer?

EastEnders airs Monday to Thursday on BBC One at 7.30pm. But how will Stuart react when he finally sees her again?

Unskilled migration will plummet by 90,000 under Boris Johnsons plans for Aussie-style points based...