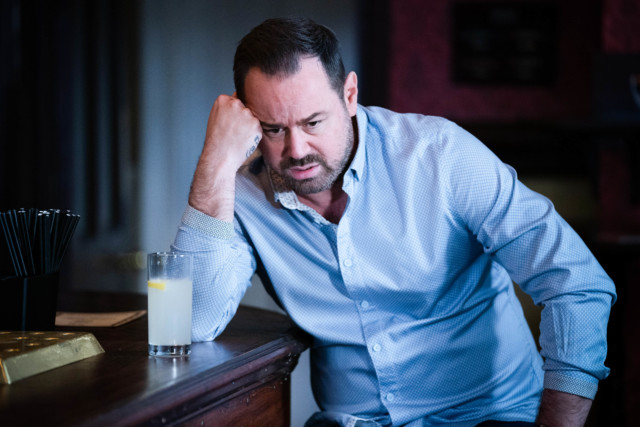 JANINE Butcher has set her sights on Mick Carter and does all she can for his affection.

But the EastEnders villain is set for another setback after the Vic landlord makes a decision about his estranged wife Linda.

Since her return in September, 2021, Janine (portrayed by actress Charlie Brooks) has caused trouble in Walford.

Along with a car theft scheme which has left Jay Brown in hot water with the law, Janine has also been fighting for the custody of her daughter Scarlett with Kat Slater.

Soon enough, however, matters of the heart took up most of her time.

After flirting with Zack Hudson, whom she met under her fake name Judith Bernstein, Janine turned her attention to Mick (Danny Dyer).

Yet the latter is playing hard to get as he still mopes over his estranged wife Linda (Kellie Bright).

In upcoming scenes of the BBC One soap, Mick attempts to save his marriage by taking his son Ollie to visit her.

Janine disagrees but Mick is quickly encouraged by Rocky (Brian Conley), Mitch (Roger Griffiths) and Harvey (Ross Boatman) to go through with his plan.

When she learns from a deflated Mick that Linda was a no show, Janine jumps on the occasion to persuade him to let her go.

Instead, Mick drowns his sorrows with Rocky, Harvey, Mitch and Patrick (Rudolph Walker).

Janine is satisfied to know that Linda is still giving Mick the cold shoulder.

However, her hope turns to devastation when it’s revealed that he has taken her advice by taking Mitch up on his suggestion: the men are going to Ruby’s to meet some ladies.

Heartbreak is looming on the horizon for the Albert Square super-bitch.

Janine has made several attempts to put an end to Mick’s marriage with Linda, to no avail.

She went as far as to approach Linda behind his back during the festive period, in a one-off appearance from actress Kellie Bright.

Most recently, Janine has warmed up even more to the pub owner following a kind gesture he made in a bid to mend her relationship with her daughter.

The pair even faked being a couple while Janine was investigated by social services.

But will Mick ever fall for Janine?

Could both characters ever become an item despite Linda’s return being in the works and Danny Dyer’s exit from the programme? 7,000 casino jobs will be lost in days unless Boris Johnson reverses decision to...