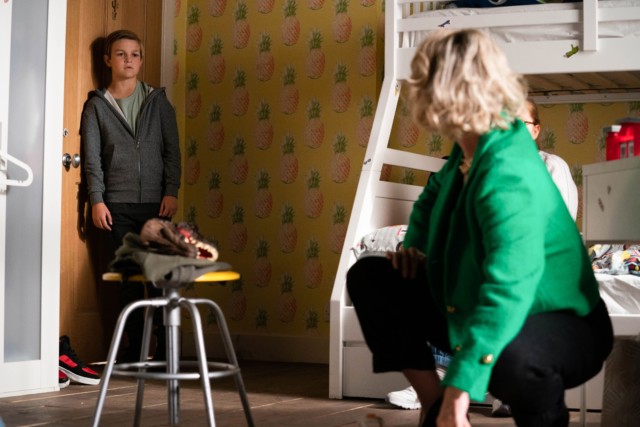 JANINE Butcher is trapped in a huge explosion as she battles to save Scarlett and Tommy next week in EastEnders.

The villain – who is played by Charlie Brooks – has returned to the Square after seven years away.

Tommy locks himself, Janine and Scarlett in his bedroomA fire rips through the house as Janine tries to escape

This week, Janine locks horns with Kat over Scarlett’s future, leading to Scarlett running away.

When the social worker calls and reveals Scarlett has disappeared, Janine grows determined to track her down and eventually finds her hiding upstairs at Phil’s place with Tommy.

​​A scuffle ensues and they don’t notice Scarlett’s jumper landing on the lit hob from Phil’s cooking earlier.

Next week’s episodes of EastEnders will see Tommy lock the door and throw the key straight down a crack in the floorboards as the fight between him, Scarlett and Janine escalates.

When the trio realise there’s a fire ripping through the building, they panic and scramble to find the key.

Will they manage to escape?

Speaking to HOAR and other media, actress Charlie recently teased a deadly fire upon her return: “We know that it’s going to be explosive, we might see some flames and a big fire, and I think some of the relationships, some of the old characters that we see her working with, for me I know when it’s exciting because I can feel it as an actress, I can feel it when two characters are sparking off each other, I’m like ‘This feels so good and so exciting’ so you’ve got a lot of that to look forward to.

“It’s fun and that’s what I’m excited about exploring with her. As well as all of the layered stuff that’s going on with her.”

It comes after EastEnders’ cast and crew were spotted filming a huge blaze on set last month.

Local residents witnessed the smoke and heard a collection of emergency service vehicles wailing in the Square.

While BBC bosses kept quiet about the storyline details, a source told Metro.co.uk at the time: “There were ambulances and fire engines and a lot of smoke. It was definitely not an emergency, they were filming something.”

An insider added: “The explosion is really the start of a massive autumn for the show that will take them through the rest of the year.”

Janine locks horns with Kat over Scarlett’s future this week

Did you miss our previous article…
https://www.hellofaread.com/soap-opera/coronation-street-fans-terrified-kelly-will-be-found-guilty-of-sebs-murder-after-disastrous-turn-in-court/

Bill Clinton and Epstein were ‘like brothers’ and loved being around Prince Andrew, says...