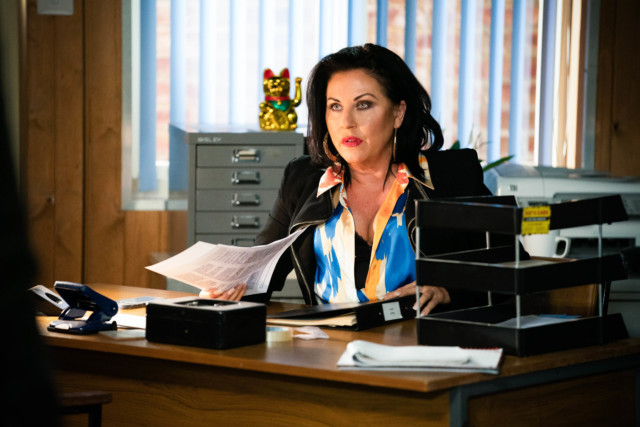 When the tough man’s sister Sam gets in between them, the owner of Kat’s Cabs drops him a bombshell next week in EastEnders. After six years away, Sam Mitchell (portrayed by Kim Medcalf) came back to Albert Square and immediately began to wreak havoc.

Her main targets, as she tries to prove she’s worth the Mitchell name, have been Kat Slater (played by Jessie Wallace) and long-term enemy Sharon Watts (Letitia Dean).

Unfortunately, Sam’s scheming seems to get the best of them as she accused Sharon of having an emotional affair with her former husband Phil, thus toying with Kat’s insecurities. The purchase of local nightclub Ruby’s – rebranded into Peggy’s – has not made things any easier.

However, Kat has stayed in touch with Phil, although their relationship and engagement is clearly on the rocks.

Next week, Phil calls her but the line goes dead, leaving Kat on edge.

To make matters worse, and while Phil is dealing with a new foe in prison, Kat is harassed by a mystery caller.

Later on, Phil calls Kat for another favour and Sam’s meddling only exacerbates Kat’s doubts about him.

Soon enough, Sam offers Kat some advice to push her away from the family empire.

This ultimately leads to Kat paying Phil a visit in prison.

But the reunion turns sour when she drops a bombshell on him.

While Kat struggles to adapt to Phil’s life, the thug is having some problems of his own as mentioned above.

Phil makes a new enemy with another prisoner called Craig, joining forces with fellow inmate Ravi in a bid to get a burner phone.

The situation escalates when Phil and Craig get into a fight, forcing prison guards to step in.

Craig later sends Phil a sinister warning, promising him he will die the following day.

This prompts DCI Samantha Keeble to get involved, telling Phil her offer of a free life as a police informant still stands.

But will Phil choose to remain in prison, despite his life being in danger? What has Kat decided to do? Phil has issues behind bars – and his life is in danger Could he accept DCI Keeble’s offer?

Royal Family latest – Prince Philip remembered by loved ones in documentary tonight as...

Rita Ora lands huge new Disney+ role on Beauty And The Beast – her...