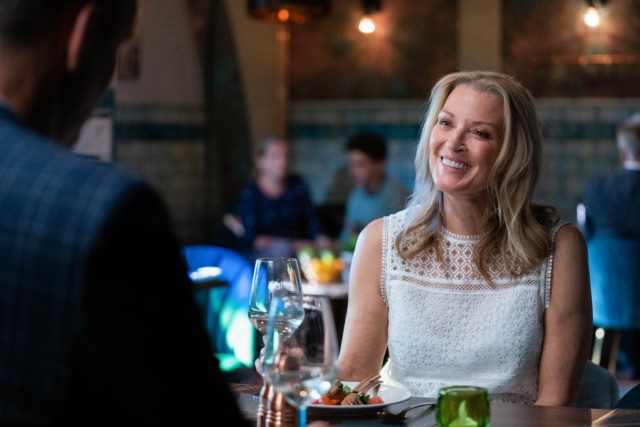 KATHY Beale lies about her age to get a date but ends up landing herself in hospital after tripping over.

The BBC One soap revealed back in July that Kathy – who is played by actress Gillian Taylforth – would be finally getting a new love interest after being single for two years.

But it’s not looking promising for Kathy as her first date next week goes disastrously wrong.

The upcoming scenes will see Kathy excited to have a match on her dating app with a guy named Iain.

But later, Peter admits he lowered her age on the app when she announces she’s heading out on a date. Kathy injures her ankle after a few drinks on the date Ash tells Kathy she better go to the hospital

But Kathy doesn’t let it bother her and, later in the week, she heads out and hits it off with her date.

But as they’re enjoying a drink – or few – at The Prince Albert, she ends up tripping over and injuring herself.

Ash examines her ankle and advises her to go to hospital. Later, Peter reassures Kathy as she kicks herself for lying about her age.

Meanwhile, Bobby frantically cleans as he worries about Kathy, blaming himself for her injury.

Bobby begs Peter not to tell Kathy, but Peter is unsure what to do.

Will Peter give Kathy more to worry about by telling her about Bobby’s unusual behaviour?

Rishi Sunak reveals HALF PRICE eat out to help out meals for ALL and...

Who is Eve Gale? Winter Love Island 2020 contestant and student from London