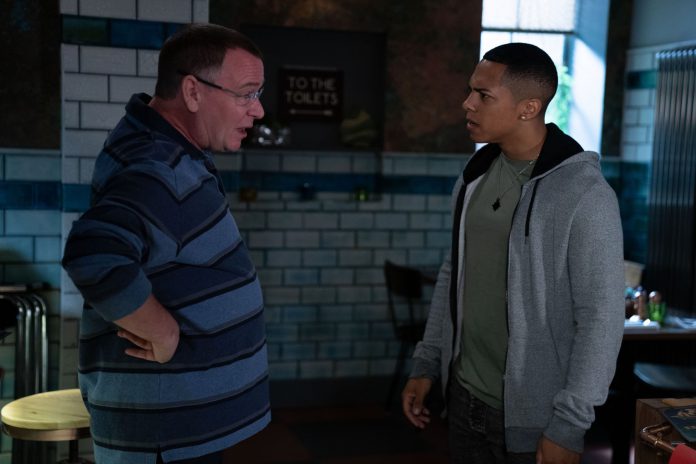 A FRUSTRATED Keegan Baker will lash out at Ian Beale in EastEnders next week before plotting to elope with Tiffany Butcher.

As the week kicks off, Tiff whos played by Masie Smith in the BBC soap – demands that Dotty Cotton puts things right with Keegans business after trying to sabotage it last week. But Dottys having none of it and as tensions rise Sonia is forced to intervene.

Meanwhile, across the Square, Keegan (Zack Morris) is desperate for work and asks Ian Beale for a job.

But, when Ian winds Keegan up, the teen doesnt respond well and ends up lashing out at the businessman.

When Keegan leaves, he spots Tiff and is pleased when she has some good news for him Dotty has promised to sort everything.

Soon, Sonia arrives and doesnt hold back at Keegan for lashing out at Ian. Fed up of everyones lack of support, a furious Tiff marches Keegan out and suggests they elope.

Keegan and Tiffany are planning on getting married

After doing some research, Tiff comes up with an idea how she and Keegan can get married quickly run away to Gretna Green.

Bernadette and Bailey are thrilled when they hear the plan and promise to help. Meanwhile, Keegan and Iqra Ahmed plot how to get back at Ian.

Soon, an excited Tiff learns that the registry office has a cancellation for that day and she and Keegan make plans to leave.

As they make their final preparations, Tiffany spots Louise on the market and Lou is left smarting after a frosty exchange.

As the clock ticks, Bernadette arrives and after some close calls the wedding party all set off for Scotland.

Ian mocks Keegan when the youngster asks him for work

But, when Louise sees Keegans mum Karen in the caf, she enjoys revealing the happy couples plan.

A stunned Karen springs into action with Chantelle, Mitch, Jack, Whitney and Sonia all racing to stop the wedding.

With Tiff and Keegan determined to tie the knot, will their families be able to stop them heading down the aisle?

Kate Middleton and Prince William will return to St Andrews University where they met...

Strictly Come Dancing’s AJ Pritchard wants to be the new ‘Ant and Dec’ with...