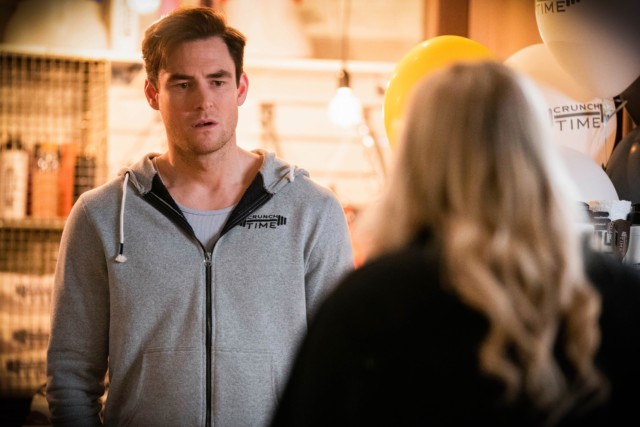 LINDA Carter forgives Sharon Watts with a touching piece of advice next week in EastEnders.

Linda fell out with Sharon when she discovered she’d tried to kill Ian Beale – and let her sister-in-law Tina Carter take the blame.

Not knowing that Gray had murdered Tina, Linda blamed Sharon for her disappearance and made clear she’d never be able to forgive her for tearing her family apart.

But next week, the stress of a disaster at the gym launch brings the former friends together.

Sharon is fuming when Zack tries to turn on the charm with potential clients at the launch.

Kheerat ends up trapping Zack in the locker room to stop him causing any more trouble, and turns up the music to drown out his cries.

Disaster strikes, however, when Nancy lets him out and he storms into the room where Sharon is doing her speech, ruining her big moment.

Linda and Sharon make peace with one another Linda advises Sharon not to give up on her brother

Later, Zack tries to apologise but Sharon tells him to pack his bags and leave.

Following the drama, Sharon and Linda make peace with one another, and Linda reminds her that Zack is still her brother.

Will Sharon listen to Linda?

Sharon also gets busy advancing her romance with Kheerat next week.

But Suki isn’t happy when she returns to the Square and discovers Kheerat’s new dalliance with the former landlady.

Viewers will remember that Suki framed Jags for the attack against Martin and got him sent to prison after he revealed his relationship with Habiba to the family.

Could Kheerat be in trouble?

Fired-up Boris Johnson says he’s ‘raring to go’ as he returns on Monday to...