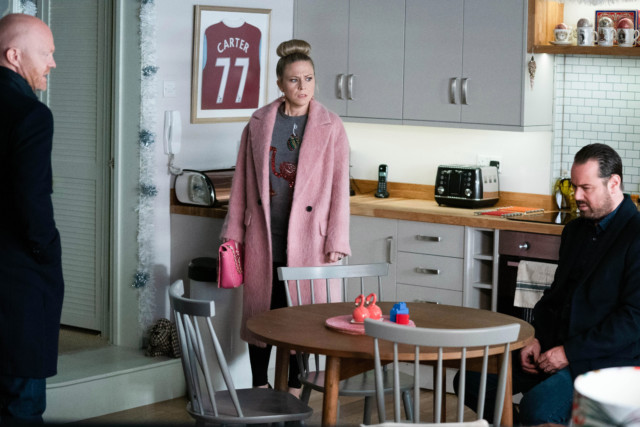 LINDA Carter is left horrified in EastEnders as Max Branning confronts her husband Mick about their affair.

Following the steamy romp last week, when father-of-two Max confessed his love for Linda, audiences will be treated to the aftermath of their night of passion.

The aftermath saw Max confront Mick about the affair

But after the confrontation, Linda seems taken aback when Mick does nothing about the news – though it’s perhaps unsurprising after weeks of their relationship being on the rocks.

For actress Kellie Bright, who’s played Mrs Carter in the soap since 2013, she revealed that the moment is “infuriating” for her character.

“All she needs is for him to just do something, even if he calls her all the names under the sun. He’s not even doing that. Actress Kellie Bright says her characters will be “furious”

“She feels angry. It’s all a bit of a rollercoaster for Linda. She wants to put the brakes on but she doesn’t know how.”

The 44-year-old added that while she didn’t think Linda “regretted” her steamy session with Max, she did feel “guilty and shameful”.

With the news spreading round Albert Square, Kellie explains that other EastEnders characters are sure to play a part in how Linda will move on from the affair.

She continues: “She is definitely a woman that would care what other people think of her. Max Branning asked Linda to run away from Albert Square

“I think in some ways when Shirley confronts her she has been waiting for someone to say those things and I think in a way she is quietly relieved.”

While it’s unclear what Linda’s next steps will be, Kellie is certain she won’t be leaving Walford with Max despite his offer.

“I think she thinks it’s madness by that point,” she says. “Plus, she is getting increasingly worried about Mick’s state.

“Even if Mick hates her, she wants to help him. So she’s very torn at this point.”

Linda has right to be concerned over Mick, as we revealed New Years Eve plot lines may see Danny Dyer’s character contemplating suicide.

A source revealed: “Mick feels he has no other option and contemplates suicide. It will be a tough but important watch.”

Young terrorists who murder can get shorter jail sentence than those caught just plotting...

Firms urged to cover wages of staff forced to isolate under the track and...