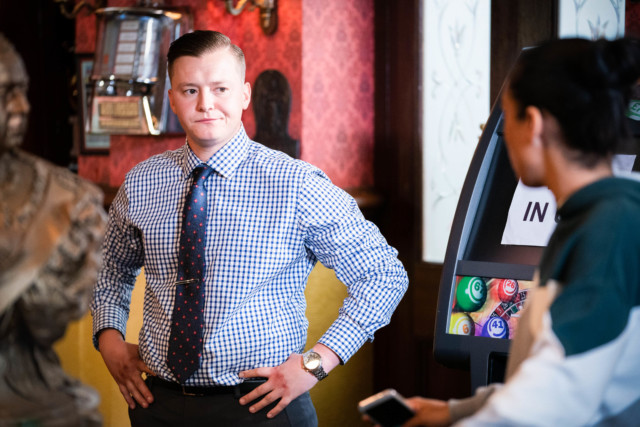 The former cab driver made a racist comment towards Ash Panesar after she threw up in his car.

Next week, Tiffany arrives for her date at Ruby’s but her heart sinks when she realises Keegan is working.

Aaron arrives but the date soon takes a disastrous turn and Tiffany tries to leave.

When her heel snaps, Keegan offers to piggy back her home.

However, when Liam spots them, he runs over and orders Keegan to get away from his sister.

Later in the week, Aaron apologises to Tiffany for the night before.

When he leaves, Liam comments that Aaron is a better catch than Keegan, but it’s clear Tiffany isn’t interested.

Iqra overhears and later stops Tiffany to tell her that Liam is wrong about Keegan.

Meanwhile, the police show up to Ruby’s to search Dotty but Keegan stands up for her.

Tiffany arrives looking for Keegan but when she spots him with Dotty, she makes a quick exit.

Meanwhile, at the Vic, Harvey is looking for jobs when Aaron says he’ll talk to Kat for him.

Harvey is unsure but Aaron insists, heading over to threaten Kat for unfair dismissal of his dad.

Ash was horrified earlier this week when her taxi driver turned out to be Harvey, whose cab she had previously thrown up in after a big night out.

Ash was irritated when Harvey made a comment about having to wash the covers twice to get the smell of her sick out.

“I’m sorry but do you have to keep going on about this. I didn’t do it on purpose,” she said as he dropped her off.

“I don’t know why I expect anything different. It’s always the same with you lot,” he mumbled.

“Yeah you lot, you think you know it all. You’ve got no manners,” Harvey said.

But Ash was having none of it and said: “Say it to my face, call my that name. I know you want to.”

“What? No I’m not that kind of bloke,” he insisted.

“I’ll call you exactly what you are, a racist pig. And I’ll be sure to tell everyone around here what kind of man you really are,” she shouted as she walked off. Ash made clear Harvey wouldn’t get away with his racism

EastEnders fans squirming after Ian Beale declares love for Sharon – and she rejects...

Universal Credit: Boris Johnson must extend £20 uplift for a YEAR or thousands will...