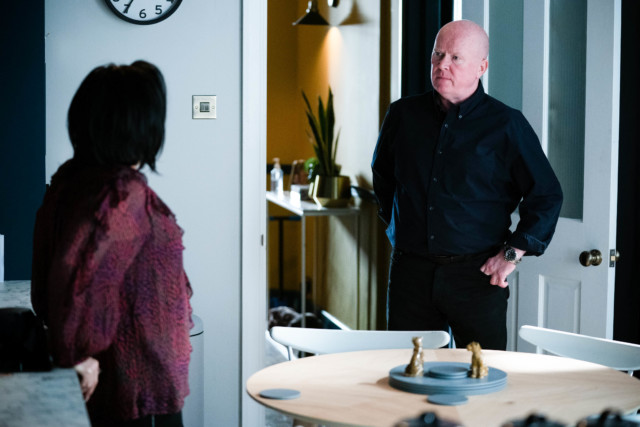 WHILE roaming free, Phil Mitchell has established himself at the head of The Arches, his lucrative empire.

But as he is facing life in prison, the EastEnders tough man gives the keys to his business away and makes a shocking decision.

Time is up for Steve McFadden‘s character.

After being turned into the police for his involvement in Vincent Hubbard’s death, the villain was given a choice by DCI Samantha Keeble.

Phil had to pick between spending the rest of his life in prison and becoming an informant for the police.

In an upcoming episode of the BBC soap, the Walford baddie’s decision becomes clear as he meets with his ex-wife Sharon Watts (Letitia Dean).

In scenes due to air next week, Phil passes on deeds for her to take care of Mitchell’s Autos, informally known as The Arches to every diehard EastEnders fan.

When Sharon asks why he chose her to take over his beloved business instead of his son, played by Max Bowden, he explains that the latter isn’t in a good way.

Ben is currently struggling to cope with severe trauma following a violent homophobic attack which occurred at the beginning of the month during a night out with his husband Callum Highway (Tony Clay), Ash Kaur (Gurlaine Kaur Garcha), Stacey Slater (Lacey Turner) and Eve Unwin (Heather Peace).

The assault, led by Neil’s far-right gang, left Callum and Ash hurt as Ben froze in fear, reminded of the death of his former boyfriend Paul Coker.

This wouldn’t be the first time Phil gives up his business as he already gave ownership rights to Sam Mitchell when he went to jail in 2003.

In 2021, Kheerat Panesar (Jaz Deol) offered to become Ben’s business partner, buying half of The Arches from him.

However, Phil remained a manager within the company.

But while The Arches seem to have been left in Sharon’s hands, Kat Slater (Jessie Wallace) later reminds Phil that they need to tell the kids that they have gone their separate ways.

Phil decided to break up with Kat to spare her from any heartbreak.

The former couple claim that their break up was caused by a major obstacle: Phil is going to prison for a very long time.

The news not only shakes Ben to the core but is also a huge shock to Tommy Moon, Kat’s 11-year-old son played by Sonny Kendall.

The young boy has been looking out for his half-sister Scarlett (Tabitha Byron) in school, knowing he could count on Phil’s support when faced with bullies.

With Phil going to prison, Tommy realises that he no longer has his protection.

But is this truly the end for the long-term EastEnders bad guy?

Tune in to BBC One to find out. Phil hands over the keys to his empire He has shown trust in his ex-wife Sharon Watts

Emmerdale ‘only has nine episodes of the soap left until it runs out’ and...

Is Xbox Game Pass really worth the subscription fee?

Boris Johnson hails ‘fantastic’ vaccine which will allow us to ‘reclaim our lives’ ahead...