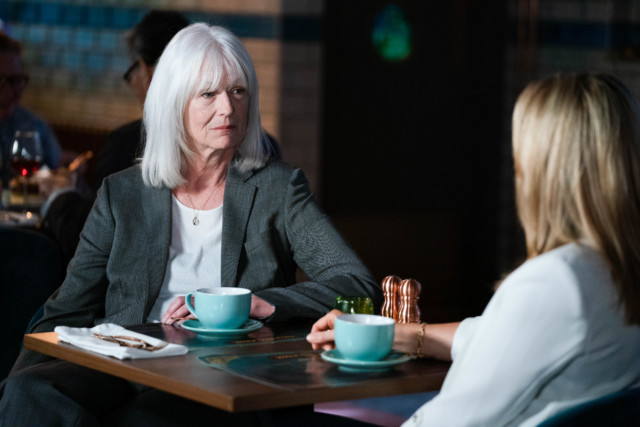 DETERMINED to get her hands on Ruby’s, Sam and Phil Mitchell are in search of funds and have turned to Denise Fox.

Next week in EastEnders, solicitor Ritchie Scott gets involved and rattles the latter with a worrying threat.

Although he is behind bars, Phil (portrayed by Steve McFadden) is running his business ventures with an iron fist although he remains quite limited in his endeavours.

Thankfully for him, his sister Sam (Kim Medcalf) is keen to show that she’s still worthy of the Mitchell name and the pair have decided to buy Walford club Ruby’s.

However, their money is running dry, prompting Sam to hatch a plan and turn to Denise Fox (Diane Parish).

In upcoming scenes of the BBC One soap, Sam piles up the pressure on Denise as a firm Honey Mitchell (Emma Barton) tells her she needs to move out as soon as possible. Hellbent on sorting out her business woes, Sam goes to the hair salon owner and asks her for the money she needs.

But when she later meets with her brother’s lawyer, Ritchie Scott (played by Sian Webber), matters are not made any better.

Sam tells Ritchie about her predicament with Denise’s money and the solicitor decides to make Denise a threat she can’t ignore – as it could compromise her own future in the Square.

While she is married to Jack Branning, Denise is still somewhat involved with the Mitchell family after welcoming a son, Raymond, with Phil.

This has caused turmoil for Denise, especially since Sam’s return to the borough.

Sam herself was romantically involved with Jack and gave birth to a son named Ricky.

And this wouldn’t be the first time Sam tries to pressure Denise into compliance.

Meanwhile, as he is set on buying Ruby’s, Phil has asked his partner Kat Slater (Jessie Wallace) to re-mortgage her cab office to get more cash for the club.

Kat may be used to Phil’s antics but was more annoyed than ready to make the move for him, despite Jonah roaming free and ready to turn their plans on their head.

Will the Mitchell’s manage to buy Ruby’s? What threat will Denise get from Ritchie – and how will she react? This prompts Ritchie and Sam to take action against Denise Fox

Prince William grew into a leader helping Britain face one of its darkest times...