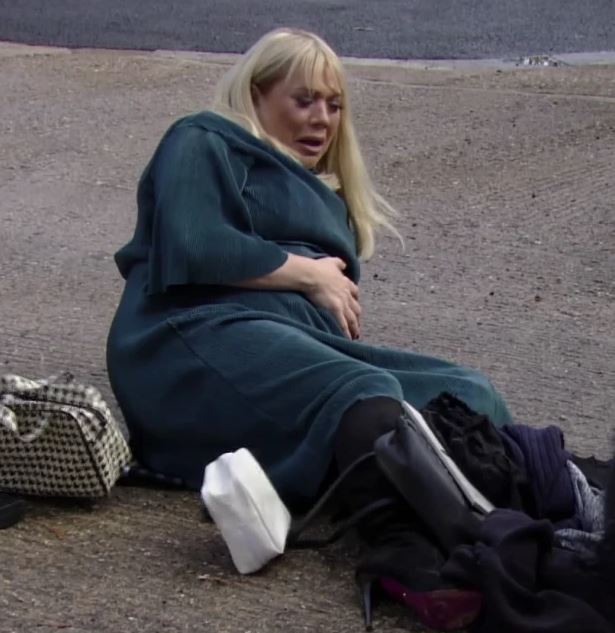 EASTENDERS’ Sharon Mitchell will be at the centre of the huge anniversary drama next week as she goes into labour after deciding to leave the Square with Dennis.

The pregnant mum – played by Letitia Dean on the BBC One soap – was stunned when her former toyboy lover Keanu Taylor showed up and begged her to run away with him.

EastEnders fans will know that Keanu made a shocking return to the Square last week to demand that Sharon leave with him to start a new life with him abroad.

As Sharon waited for Linda to arrive at the Beales’ house, she got a nasty shock when Keanu turned up on the doorstep.

Sharon already knew that Keanu was still alive thanks to a drunk Linda spilling the beans weeks ago – so his appearance wasn’t a complete shock to the system.

But she was horrified he’d returned to the Square and begged him to leave immediately before one of the Mitchells finished off the job theyd started by murdering him for good.

Keanu told her: “Im not going anywhere. Phils gone now. Ive come back for you, for both of you. I want you to come away with me, now.”

Keanu is back for revenge in EastEnders

Next week, during the huge anniversary week, Sharon will tell her son Dennis theyre leaving Walford.

But when she bumps into Kathy and tells her the news, she comes face-to-face with a furious Ben.

Following the row, Sharon is shocked when she goes into labour.

Will this thwart her escape plan?

EastEnders have confirmed that one major character will seal their tragic fate in the special anniversary week of episodes.

And with Sharon set to be at the centre of the anniversary drama as she goes into labour, could she be in danger?