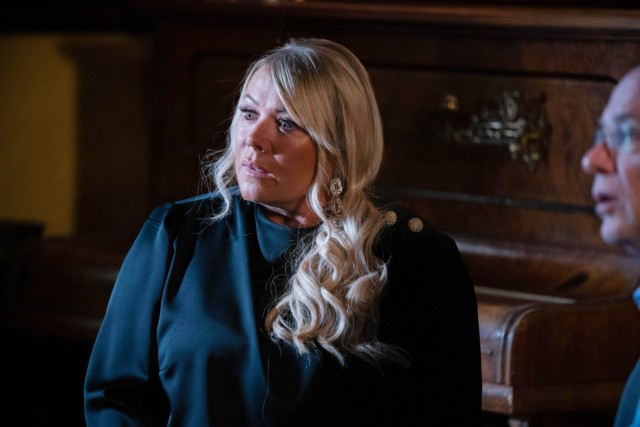 SHARON Watts will grow increasingly desperate to kick Ian Beale out of the Vic next week in EastEnders.

Ian’s mum Kathy will give Sharon even more of a reason to boot out Ian after she tells her he’s fraudulently remortgaged her cafe – and that she’s kicked him out of his own home.

EastEnders viewers know that Ian used Max Branning’s money to buy the Vic for Sharon after killing her son Dennis during the soap’s anniversary boat disaster.

Ian was supposed to be keeping hold of Max’s money during his divorce to Rainie to stop her getting her hands on it, and found himself in hot water when Max demanded it back with interest. Sharon wants to get Ian out of the pub

And when Kathy discovered what he’d done, she threw his stuff out onto the street and booted him out of his own home.

Things weren’t looking great for Ian as Peter and Bobby failed to support their dad as he stood on the street while Kathy sent him on his way.

Viewers know that Ian has also sabotaged his relationship with his former best friend Sharon after turning nasty when she rejected his advances.

Sharon was shocked when Ian made a list of unrealistic targets for her to meet at the pub – or he’d hire someone else.

Next week’s episodes of EastEnders will see Sharon grow desperate to boot hew new nemesis Ian out of the Vic.

Later, Kathy marches over and tells Sharon about her falling out with Ian.

Will Kathy’s revelation prompt Sharon to find a way to get rid of Ian?

Viewers will remember that Ian fled Walford in 2012 after suffering a breakdown and was eventually found sleeping rough.