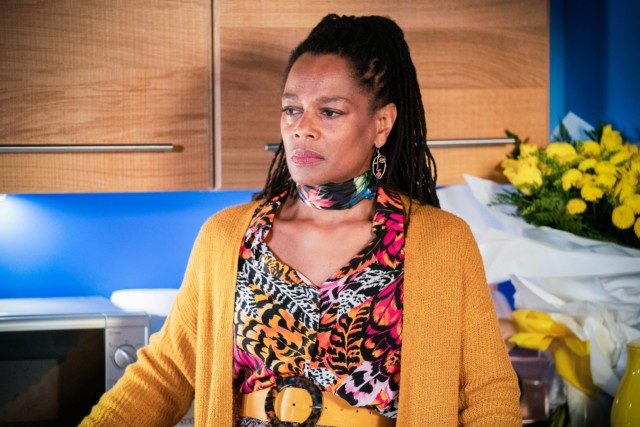 Patrick suffered a major stroke in 2014, and again back in January 2021, but managed to recover.

Sheree warns Lola not to tell Patrick about Isaac’s condition

Next week, Patrick considers a letter about clinical trials for stroke medication.

Meanwhile, Sheree warns Lola that Patrick can’t know about Isaac’s condition, explaining that the last time her son was heartbroken, he relapsed badly.

Later, when Patrick mentions the trials, Sheree is horrified by the idea but he snaps and tells her it’s his decision.

Will he go ahead with it? Viewers were horrified back in January when Patrick’s life flashed before his eyes as he suffered a stroke during a heated showdown with evil Lucas Johnson.

Viewers know that Patrick had enlisted Phil Mitchell to try and keep Denise Fox safe from her ex Lucas.

But Lucas turned up on Patrick’s doorstep and barged in, forcing Patrick to admit to encouraging Phil’s minions to attack him.

Patrick then started screaming at Lucas to hit him before he was suddenly struck down by something, collapsing into the armchair as he suffered a stroke.

Viewers then saw Lucas mull over whether to call the emergency services or leave Lucas to die.

Did you miss our previous article…
https://www.hellofaread.com/soap-opera/coronation-street-fans-livid-as-two-episodes-cancelled-tonight-for-england-world-cup-match/

Dancing On Ice’s Faye Brookes breaks down in tears after judges’ dish out ‘harsh’...

What is a spoilt ballot paper? Protest voting explained