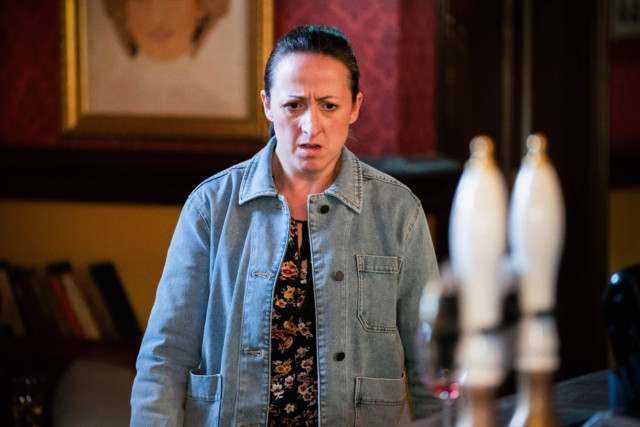 SONIA Fowler horrified as her estranged father Terry Cant returns with a fake name next week in EastEnders.

Actor and Comedian Brian Conley has been cast in the role of Sonia’s dad, who Sonia began searching for last year after her daughter Bex left to go travelling last year.

But next week, her reunion with Terry doesn’t exactly get off to the best start.

Sonia returns from Dubai and is aghast to learn from Denise that Dotty is working as a hostess at the club.

Viewers will see her storm into the pub and publicly berate Dotty for working there, unaware that Terry, aka Rocky, has arrived in Walford and is enjoying himself at the club.

Sonia is mortified when Terry comes looking for her

As Sonia rages at Dotty, she announces she won’t stand for her pandering to creepy men and gestures towards Terry.

After returning to The Vic, Sonia is horrified when Terry appears and asks after her, and quickly disappears.

Rocky tells Tiff and Denise that he has been looking for Sonia after she sent him a letter – and that he is Terry Cant, her father. Later, Terry recalls memories from Sonia’s childhood, explaining how he got the name ‘Rocky’, but Sonia is wary and decides to test him.

Dotty overhears and admits that she’d give anything to be able to talk to her dad again, and that Sonia should give Rocky a chance.

Will Sonia give in?

Speaking about his arrival on Albert Square, comedian and actor Brian Conley – who is set to play Terry – previously said: “As you can imagine being a Londoner and now being part of EastEnders is such an incredible moment for me.

“I know for sure my dad’s looking down from above and saying ‘Good on yer son!’ It was always his favourite programme.

He added: “So, in so many ways, it really is an honour to be part of such an iconic show and to be working with an incredibly talented team on camera and off.

“I cannot wait to order my first pint at The Queen Vic.”

Apex Legends’ Catalyst will change the game with her new ability