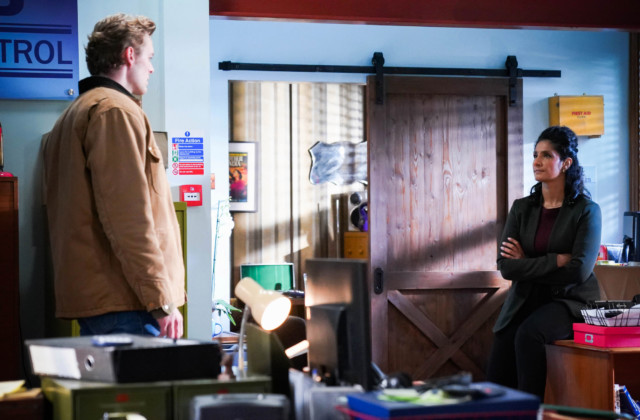 SUKI Panesar threatens her daughter Ashs’ boss in an effort to get her job back next week in EastEnders.

Ash was suspended after administering pain medication to love interest Peter Beale while she was off duty and hungover.

Suki discovers Ash has been suspended from work

Next week, viewers will see Suki arrive home to confront Ash after discovering she’s been suspended.

When she sees Peter and Ash all loved-up after sleeping together, she’s furious that Ash is putting her relationship before her career.

Ash and Suki start rowing, with an awkward Peter stuck in the middle.

Suki tells Ash she shouldn’t throw her career away for Peter, but Ash insists everything will be cleared up at her hearing.

Suki heads to the hospital and introduces herself to the consultant

Peter assures them both he’ll say he gave himself the meds and clear Ash’s name.

Later in the week, Peter asks after Ash and Suki tells him she reckons their relationship is over.

Suki then heads to the hospital and introduces herself to the consultant and asks to have a word about her daughter. Ash delivers some home truths to her mother

But he’s interrupted when Ash receives a call from the hospital.

Will Suki sabotage Ash’s chances of getting her job back?

Furious that Ash and Peter are back on, Suki reveals she threatened Ash’s boss.

Ash can’t believe what she’s hearing and warns her mother to back off, leaving her hurt.

EastEnders viewers know that Peter slept with Suki back in January before started to date her daughter Ash.

Fans were horrified when the criminal mastermind seduced the youngster after going on a disastrous date.

Will Suki blab about sleeping with Peter to hurt Ash?

Britain hits back at Macron and EU over barmy plan to shut British film...