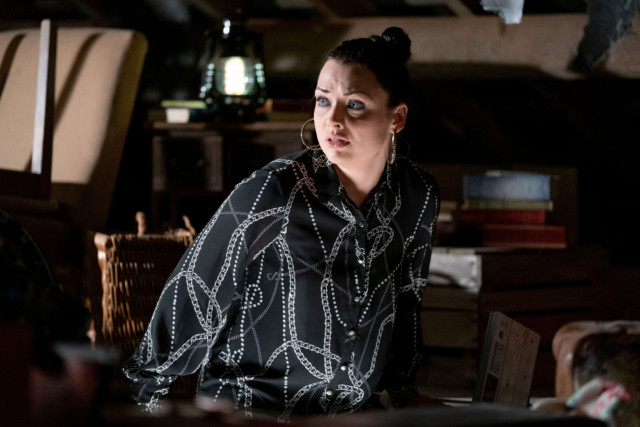 EASTENDERS’ Whitney confronts Kat as Kush hides from the police in her attic.

Whit warns the iconic Slater character that her boyfriend a ticking timebomb as he tries his best to stay out of prison.

Next week Albert Square fans will see Kush hiding out in Sonia and Whitney’s attic after escaping arrest.

Whitney (Shona McGarty) reminds Kat that they won’t keep him there forever, so how long can his whereabouts stay a secret?

Things have gone pear-shaped for Kush in recent weeks after he became addicted to online gambling when trying to win money for Stacey to pay Ruby back.

It got so bad he gambled a huge sum of money away in an ill-advised game with the Panesar family. How long will Kush be able to hide from the police?

He then found himself involved in the car heist involving Phil and Ben Mitchell, Kat Slater and Shirley Carter.

After being caught by policeman and Ben’s boyfriend Callum Highway, Kush told him he would open his mouth about the Mitchells’ involvement – and Callum’s unless he let him go.

“I’ve got nothing to lose, I mean it I will tell them everything so just move,” he demanded as Callum obliged and let him go.

Walking back into the room, Kush punched Callum – to make it look real – before fleeing and he escaped justice. Davood Ghadami will be leaving the EastEnders in an explosive exit

It was reported in September that Kush star Davood Ghadami is set to leave the BBC One soap, with his character set to get an “explosive” send-off.

The soap star, joined the show in 2014 was axed after producers decided not to renew his contract in favour of a dramatic exit.

A source explained: “Davood’s contract was up and bosses decided his storyline had run its course.”

They continued to The Mirror: “He’ll be missed but they’re making sure he goes out with a bang. Sometimes the cost of having a big storyline means losing big characters.”

Did you miss our previous article…
https://www.hellofaread.com/soap-opera/im-a-celebs-ruthie-henshall-reveals-she-had-sex-with-prince-edward-in-buckingham-palace/

I cancelled my maternity leave just 10 days after giving birth to try and...

Who is Chris Von Aspen and when was she pictured with Prince Andrew?